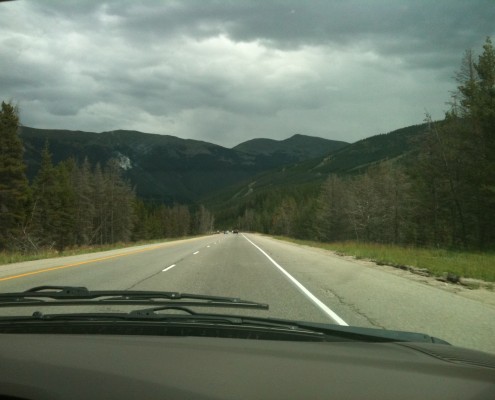 To tell the story of my life-changing road trip, I must first return to one of the darkest points of my life. It’s not easy to think back on what I went through, but it’s important that I never ever forget. By remembering and telling my story, I make sure I never fall into that trap again. By sharing my truth, perhaps I will help someone else realize that a better life is waiting for them.

In 2004 I began a relationship with a woman who seemed like a great person at first. We shared many of the same values and goals. I thought that we could support each other’s dreams and build a life together.  Unfortunately, she developed a chronic illness, and became trapped in self-pity. Nothing I said or did could convince her to do what she needed to do to help herself. She began to use her illness as an excuse to stop participating in life. She blamed everyone else for her problems, and took her rage out on me in the form of emotional and psychological abuse.

She would say terrible things to me such as  “you’re too fat to travel,” and threatened to break my computer when I Skyped with a friend she didn’t like. We stopped leaving the house because she said it was too difficult.  As things got worse, she would threaten to leave me stranded in the bathroom, and if I was depressed and crying she’d yell at me to shut up. Once she screamed at me when I cried for help after an electric toothbrush became so tangled in my hair that eventually it had to be cut out. She also exploited me financially, demanding thousands of dollars every month and not accounting for how it was spent.

On my 33rd birthday, February 27, 2010, we were supposed to go out to dinner to Red Lobster just down the road. At the last minute she refused to go, saying it was too much trouble. At that moment it hit me just how trapped I was.  Before her, I left the house every day. I would spend hours exploring Venice Beach and Santa Monica, with a friend or even by myself. I would take road trips, go to concerts, live life like everyone else. Now all that was gone, and I was stuck in my own home with someone who hated herself and everyone else. I couldn’t use the Masters degree I worked so hard to earn. I had big plans for my life, but now I was nobody and had nothing.

A wave of desolation washed over me. I felt like I wanted to die. But I’m terrified of dying, so instead I tried to imagine where I wanted to be and what I wanted to be doing right at that moment, if I could. The first thing that popped into my head was, “I want to be at the Statue of Liberty.” It symbolizes freedom, which was the furthest thing from what I had. It also represents New York City, a place I had long wanted to visit. I love musicals, yet I’d never seen a show on Broadway.  I’d recently become friends with a Broadway performer, Tamra, who was very supportive of me, and helped me realize that the way I was being treated was wrong. I wanted to meet her in person, and visit other friends on the East Coast whom I’d never met or hadn’t seen in years. So that was the place. That was the dream.

I found a photo of the Statue of Liberty online and printed it out on a plain piece of computer paper. In the sky I scribbled a date with ballpoint pen – 2/27/11. I gave myself a year. A year to lose weight, because my destroyed self-esteem really believed that I was too fat to travel. A year to figure out just how I would manage to find someone to drive me across the country and help me along the way, because I didn’t believe anyone would want to do that. I taped the picture on my wall where I could see it every day as I sat at my computer. Every time life felt unbearable, I would look at the picture, and it gave me hope.

Two months later, my partner’s father had a mild stroke. She decided to fly back to her home state and help him for a few weeks. That meant I needed to arrange help for my evening care, which she had been doing, albeit verbally abusing me every night. I’d also be alone all night for the first time in years. At first I thought this would be stressful, but then I realized I was looking forward to it. The day she left, it felt as though an enormous weight was lifted from my shoulders. I was free to go where I wanted to go, and do what I wanted to do, without someone complaining and glaring at me. I could go to the bathroom when I needed to, instead of waiting as long as possible because I dreaded the inevitable tirade of abuse.

It was early May and my online friends were abuzz with excitement about the upcoming Hartford, Connecticut music jam. A group of live musicians and friends from Second Life were gathering to perform and socialize, many meeting in person for the first time. My friend Tamra was planning to attend. As we discussed the event, I said wistfully, “I wish more than anything that I could be there.”

She replied, “Well, why don’t you come?” She’s a spontaneous person who follows her heart, and as she says, we should all do something wonderful and crazy at least once in our lives. The realities of my life have forced me to be someone who plans ahead, but I wanted to do it anyway. It felt like the hand of fate was beckoning to me. A voice in my head said, “This is your chance. Break free.” I knew I had to try.

I had less than a week to find someone to drive and assist me. I asked one of my assistants if she knew anyone who would be interested. Since she has four kids, I didn’t expect her to say yes, but almost immediately she agreed to go. Later I found out that she didn’t really want to go, but needed the money, and there was much more to the story involving her friendship with my partner, but thankfully I was blissfully unaware of most of that during the trip. The rest of that tale is another story for another time.

I was doing it! I was going to the East Coast, and that meant I could visit New York City. I had no time to get show tickets, but I made a reservation to spend two days there and hoped for the best. We made plans to visit New Orleans, as my assistant’s family lived nearby.  There would also be a few days at my Dad’s house in Indiana, and a night in Montgomery, Alabama. It was to be the trip of a lifetime. I knew it would change me forever, but I couldn’t have known how much.