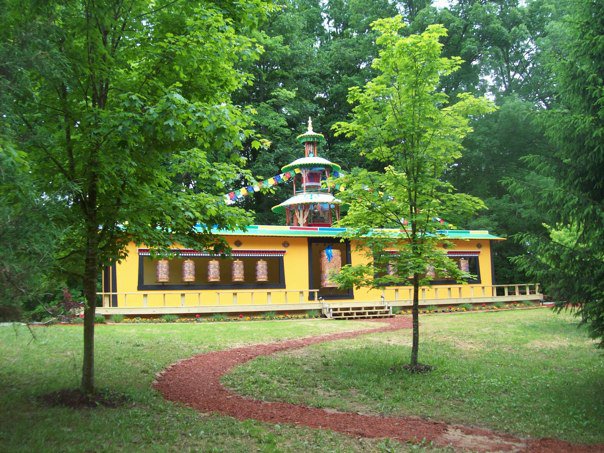 On my way back across the country, I stopped again to visit my dad in Indiana. I had surprised him on the way there, showing up totally unannounced, and discovered that it’s true that single men only have beer and pizza in the refrigerator. On the way back he was prepared, and we were able to spend a few days catching up. I hadn’t seen him in a couple of years, and hadn’t been back to Bloomington since 2000. It brought back a lot of memories, especially of my mother, who died of cancer in 1999 when I was only 22 years old. Losing her when I did was extremely hard and really shaped my life in many ways. My dad has lived in the same house all these years, but the last time I was there was just after she was gone, so the memories in some ways were fresh in my mind. It was hard but also nice to make some new joyful memories.

I got to spend a few hours at the Tibetan Buddhist temple, founded and built by the Dalai Lama’s brother. Unfortunately I had just missed the Dalai Lama’s visit, but that meant that it was very quiet and peaceful there, which was exactly what I needed.  I needed to meditate to clear my head and see what path my soul was ready to take next. I’ve never been very good at meditating, as my mind is always going going going and won’t stop. But in that place I felt some peace. I felt a sense of harmony that stood in stark contrast to the atmosphere of hostility at home in San Diego. I knew I needed peace in my life, but I was terrified of the battle I’d have to fight to get it. 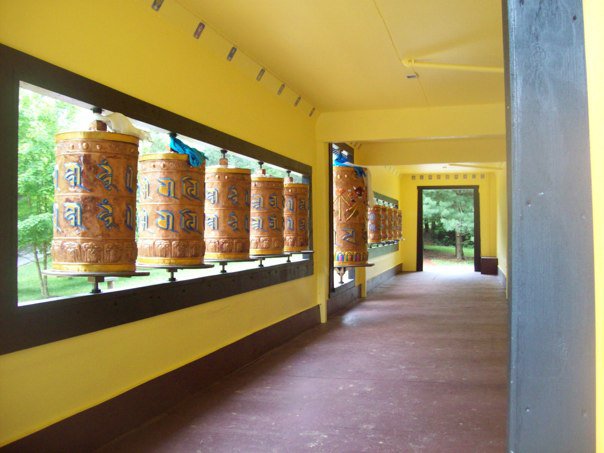 My words from May 19, 2010: Today I visited the Tibetan Cultural Center, which was founded by the Dalai Lama’s brother. The Dalai Lama was there just a week ago..sad that I missed him. It’s an amazing place, over 100 acres with a meeting area, temple, and several monuments to the Tibetans who have been killed and oppressed by the Chinese government. I felt rejuvenated after wandering the beautiful grounds, & took a few moments to meditate & say a prayer in the temple. I don’t subscribe to any single religion, I prefer to choose what speaks to me from all of them, but for some reason, I often feel most connected to my spirituality when in Buddhist temples..there, and just out in the forest, in the middle of earth’s beauty. The center had an abundance of both, and it left me with a quiet, mellow sense of inner peace that I haven’t felt in a long time.
Afterwards, [assistant] and I ate at the Snow Lion restaurant, which is owned by the Dalai Lama’s nephew. It’s one of only a few Tibetan restaurants in the US. The food is similar to Chinese, Indian, and Thai, but has its own unique spices and flavors. I try to go there every time I visit Bloomington.
After lunch, we did some shopping downtown, found a Tibetan store, a Fair Trade gifts store, and some other lovely shops. Got lots of goodies for various people.  All this, in the middle of Indiana. Bloomington is a great town….i could move back here and be happy, I think. Lots to do, great people, and closer to family and the East Coast destinations I’d like to visit more often. But I’d miss the CA weather!
I think I just need to be a Gypsy, load up all my dogs and live in a wagon. I am so much happier on the road, free to go where I want, see who I want, and experience new cities, cultures, and people. I’ve never lived in one place for more than 7 years, never found a place that is truly home. Home is where I am at any moment. Home is being with the people I care about, wherever that may be.

After Bloomington, I headed south and stopped for a night in Montgomery, Alabama, where Tamra had just arrived to begin rehearsals for a musical. It was a warm, humid evening, and a storm rolled in with raging lightning and thunder. We’re both terrified of storms, but laughed over dinner at how we just met, yet had seen each other in three different states so far. Saying goodbye to her that night, my tears mixed with the pouring rain, I resolved that I would see her again soon. I would do whatever it took to free myself from not only my abusive partner, but all of the negative thoughts and beliefs about myself that kept me from being the best person I could be. I would rebuild my life so that I was free to travel whenever I wanted to see my friends, to do my best to give back in some measure the great gifts of love and support they have given me. A true friend who believes in you, and brings you back from the brink, is worth braving the storm.