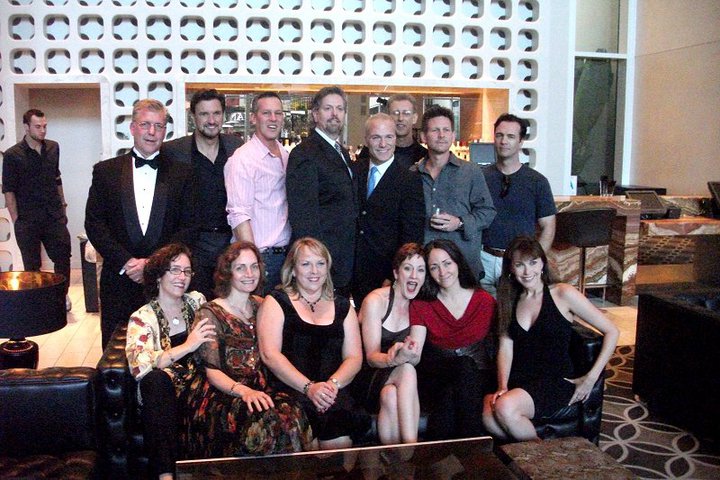 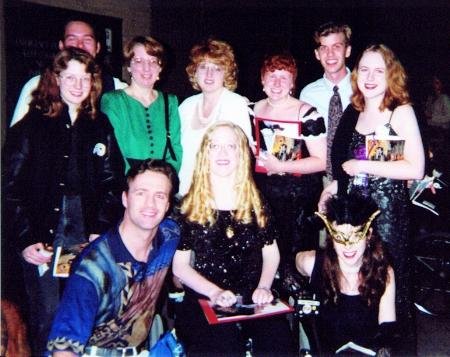 I’ve been a fan of the Phantom of the Opera since I was 14 years old and heard the music wafting upstairs from my grandfather’s room in the basement. He was an amazing person, a musician himself, who taught my mother and later me to appreciate musical theater and opera. When a friend went to see the show in LA and came back with a copy of the original novel and a book with gorgeous photos of the production, I was intrigued. As I read and listened, I was moved to tears by the story and identified with the Phantom, who was misunderstood and rejected because of his appearance. High school was difficult for me, with the pressures of school, physical therapy, and lack of acceptance by many of my peers. I had a few friends, but always felt out of place, and couldn’t wait to get out of Indiana and go to a place where perhaps I wouldn’t feel like the Phantom of the Opera. 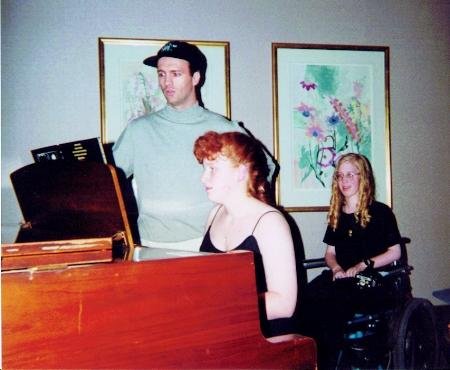 Ciaran Sheehan with Carrie and me, 1996

I was able to see the show a few times, and when I got to Stanford and had Internet access for the first time, I began connecting with fellow Phantom fans online. I started the first email discussion list for Phantom, and developed a community of people who by and large were kind, compassionate and accepting. Many of those people are still close friends today. I traveled to several gatherings around the country and in Canada, where we online friends would meet in person and see the show together.

Altogether I saw the show over 30 times in a six-year span, mostly in San Francisco where there was a standing production in the late 1990s. I got to know some of the cast, helped one of them out with a few projects, and began to consider music PR and marketing as a career. After I moved to LA – to live near my best friends Paul and Christine whom I met through Phantom – I did indeed pursue that track, working for a music website that was later bought out by Yahoo. 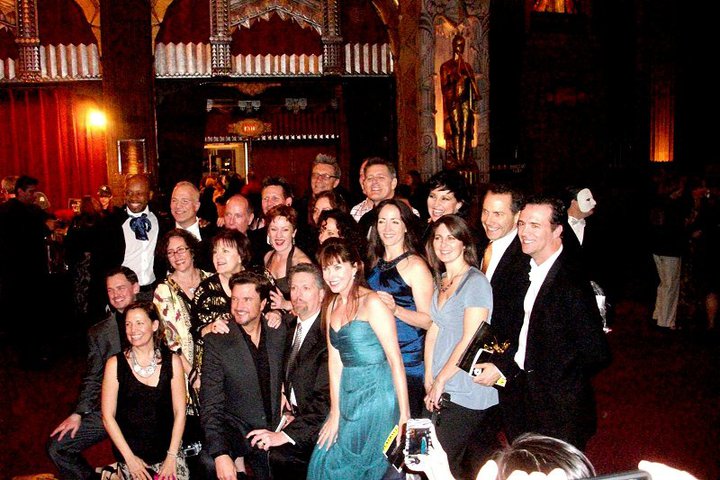 Paul, Christine, and I stayed just as close, but moved on to other interests. Phantom was something of a footnote in my life when I met my partner in 2004. Still, I should’ve taken it as a warning sign that she didn’t understand why I love the show so much. She thought of the Phantom as evil, and even reading the original novel and Susan Kay adaptation did little to change her mind. She couldn’t fathom the rejection and pain I had suffered through much of my life, that led me to identify with the character. I was upset by this, but like everything else I loved and she didn’t, it got pushed to the side.

Everything changed in 2009 when I met Tamra in Second Life. She played Christine in Phantom, as well as many other notable musical theater roles, and my love for musicals was reawakened. I began working for her, and saw a chance to go back to what I love to do – promotions, marketing, and management for musicians and actors.

With that reawakening, part of me started to come back to life too. I remembered who I was and began to feel a bit of self-respect again. My ex could see it, and that was when the abuse began to escalate. She became more controlling and threatening; after my second New York City trip it got even worse. So it took a lot of courage to tell her that I was going to LA to see the closing of the national tour of the Phantom of the Opera. I was ready to end my marriage, but was terrified of how she would react. I still didn’t quite have the courage – but Phantom gave it to me. As I watched the show, all the memories of who I had been overwhelmed me. Phantom had taught me that I deserve to be loved and accepted for who I am – how could I have forgotten? There, back in LA, surrounded by Paul, Tamra, and Glenn, I felt loved. I felt strong. I felt free.

I finally had the inner strength I needed. Within two weeks I told my ex I wanted a divorce. She insisted on waiting until after Christmas to file, but shortly after the new year, I realized she was just trying to drag things on to continue to leech off of me. I went to my attorney and filed the papers.

I discovered that my ex and one of my assistants, the one I’d traveled with, were going out to bars and getting drunk every night. She wasn’t looking for a job or making plans to move. The spare bedroom in which she’d holed up had turned into something out of Hoarders. She faked an electrical issue at the house in an attempt to access my computers. I got yelled at daily; I felt terrified to be home alone with her with no means to protect myself. Yet still my attorney said that verbal and emotional abuse were not enough to force her to move out. (I’ve since learned that was wrong).

Finally, I received my latest credit card bill and found that she had stolen my newly changed card from my purse and made unauthorized charges – over $1000 worth of insurance premiums and other charges that weren’t mine. I immediately called my attorney and said please help, this can’t be legal. She said yes that is abuse, and now she can be removed. She called my ex’s attorney, who was furious at her own client, and she was forced to move out within a week. The fraudulent credit card bills were deducted from the money I gave her as part of the divorce, which meant she got very little since she’d already wrecked me financially over the previous years. As a parting blow, she stole several valuable items including my video camera.

I was left financially decimated, emotionally damaged, and overwhelmed by the task that lay ahead of me – becoming whole. But I was free. My life was my own. I promised myself then, and forever vow that I will never allow anyone to take it away from me again.