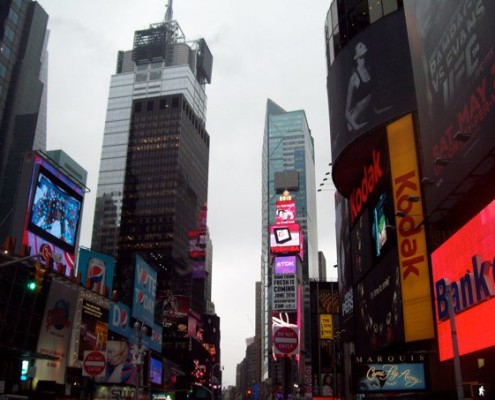 There’s no other city in the world like New York City. I’ve been to many large cities, but nothing prepared me for the experience of driving into Manhattan for the first time. It was overwhelming – the sheer size of the buildings towering over me as I emerged from the darkened tunnel, the hustle and bustle of cars and taxis and pedestrians of all ages and ethnicities, little restaurants and shops all packed together in a rainbow of humanity. I felt a surge of fear, and joy, and freedom, all at once. Here is a place where anything is possible. And that means anything is possible for me.

We stayed at the Holiday Inn in Times Square – Holiday Inns are my usual go-to hotel, as they’re typically reasonably priced and wheelchair accessible. However, I cannot recommend the one in Times Square. The room was so small that I couldn’t get to the far side of it. I could barely get to my bed. The bathroom was very tight for a wheelchair. There was only one elevator, and it was small and so busy that we waited 10 minutes or more for it on several occasions. 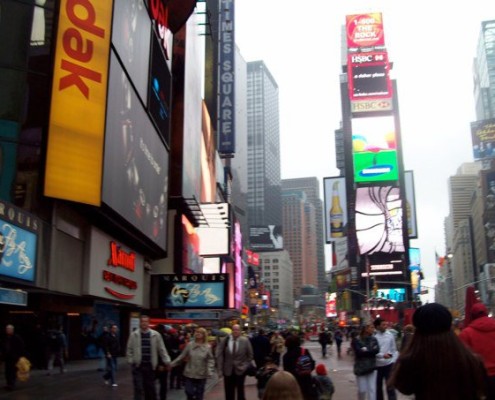 Times Square and Marriott Hotel. I feel so small, yet so free.

While exploring Times Square, I discovered the beautiful Marriott hotel right in the middle of everything. It’s hard to find accessible public bathrooms in many big cities, but NYC is one of the worst. If you’re in Times Square, you can’t go wrong with the Marriott. There are two different public bathrooms that are accessible from the elevators without needing a key. If you are able to spend the money to stay in Times Square, I also recommend the rooms, as I stayed there on my second trip and they were beautiful and very accessible. But if you really want to save money, stay over the bridge in New Jersey. There are plenty of accessible rooms at a much cheaper rate, and free parking. Even if you drive into the city and pay to park, you still save money.

Back to my story – we settled into the tiny room and freshened ourselves up after the long drive while we waited for my friends to arrive. I was excited and terrified at the same time. I wasn’t new to meeting friends from online, but this was different. Tamra was and is someone who came to mean a lot to me through working together and being friends in virtual reality. In many ways I feel she saved my life, by treating me with care and respect when I’d been told so many times I was worthless that I had come to believe it. She listened as over time I gained the courage to tell her what was happening to me, and she said I deserved better. She believed in my dreams when I had just about given up, and when I said I wanted to come to NYC and the Hartford Jam, she told me to go for it. 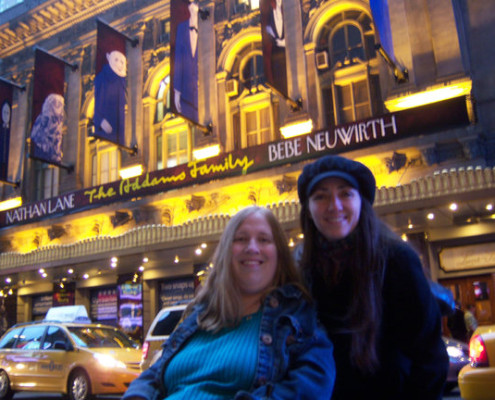 Tamra and I outside The Addams Family

Deciding at the last minute to drive across the country to New York just because I wanted to, because I had the chance and no one could stop me, was and remains the craziest thing I’ve ever done.  Even as I was doing it, I wasn’t sure if I was making a mistake, until the door of that tiny elevator opened and I saw Tamra and her husband Glenn waiting for me in the lobby. Then I knew I had made one of the best decisions of my life. She was everything I imagined she would be and more. I was myself, not a perfect avatar, just me in this body grown fat from years of depression and being stuck at home, propped up by pillows in a wheelchair that didn’t fit me properly. It didn’t matter – she accepted me as I am. They are both wonderful people, who treated me with great warmth and kindness that week and on many occasions since. I’m so lucky to have them in my life. 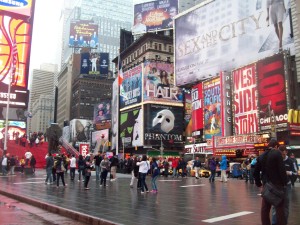 Times Square, with billboards for many of my favorite musicals

That afternoon we went to an early dinner at Carmine’s, a famous Italian restaurant in Times Square. It was the best Italian food I’ve ever had, served family style in a comfortable yet elegant environment. Even though I knew New York was famous for fine cuisine, I had no idea how incredible food could be until I experienced the restaurants there. Aside from New Orleans, no other place compares – and for diversity of ethnic cuisine, there’s only NYC. 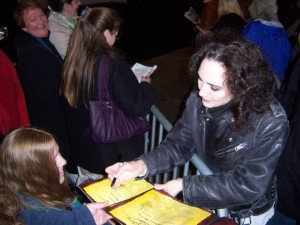 After dinner it was still early, so we decided to try to catch a Broadway show. I wanted to see the Addams Family, but since it just opened, we expected to strike out on getting tickets. Amazingly, we were in luck – they had seats available. I had waited 33 years to see my first Broadway show on Broadway, and it was one to remember – Nathan Lane and Bebe Neuwirth starred in a musical take on the famous cartoons, TV show, and movies. It was very funny and enjoyable, although none of the music really stuck in my head. After the show I was able to meet Bebe Neuwirth briefly at the stage door. My first night in New York was everything I dreamed of and more.