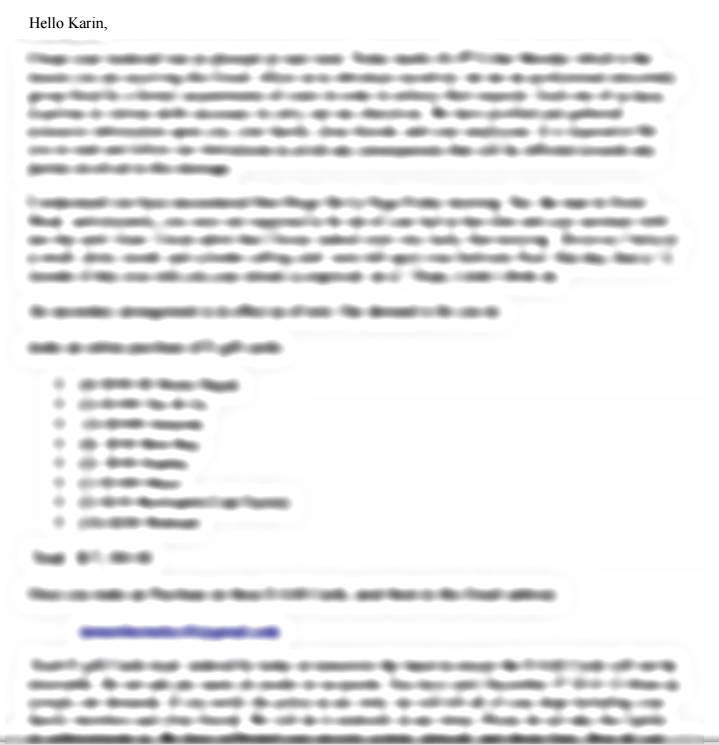 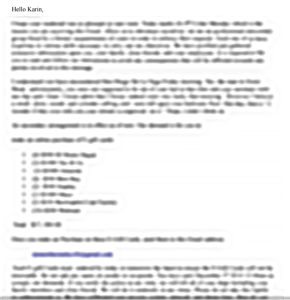 The letter, blurred for evidence reasons.

My first call on Monday morning was to my IHSS social worker. The call went to voicemail, as it always did, so I left a brief message describing what had happened. I told her that an IHSS registered caregiver was involved, and said it was urgent that she call me back so that steps could be taken to investigate the caregiver and block her from providing care. Despite multiple messages left over the following weeks detailing the events that followed, my social worker  did not return my calls until February 23, 2015, nearly three months after the robbery and shortly after my story began to be widely shared on social media.

I was eating dinner with C and her daughter when the email came. After my friends left, we had run a few errands, and sat down in a quiet restaurant for some peace and quiet and normalcy. I’m an obsessive email checker, and was still receiving an outpouring of support and assistance via Facebook, so I wanted to see if there were any new messages. I pulled out my phone and in the space of a moment, everything changed forever — again.

The subject of the email was my name: first, middle, and last. There was no text, only an attachment. Concerned about viruses, I opened it via Google Drive. I started reading it out loud, not even realizing what I was saying, not even seeing the look of horror that came across C and her daughter’s faces.

Due to the pending court case I can’t post the exact text here, but it was terrifying. The writer claimed to be part of a group of mercenaries who were hired to attack me. They said I was supposed to be alone and that we were lucky that C was there. They said that now a “secondary arrangement” was in effect: I was to send them $17,000 in gift cards, or they would kill my friends, family, and dogs. To back up their threat, they included personal and contact information for my family and some friends, taken from Facebook and the Intelius search that was done with my credit card. They correctly identified two of my best friends, and listed the names of all of my dogs. They said if I involved the police, or if any of them were arrested, they would retaliate.

As I read the letter, I felt my entire world crumble around me. I could put up all the cameras in the world, but I can’t fire a gun. Alone at night, living according to a schedule my attackers knew, I was helpless to protect myself.

I contacted the police immediately, and waited an hour for officers to come and search my home before I went back inside. My mind flashed through every movie I’d ever seen where people have to flee for their lives. Now that was my life. What do you pack when you only have a few minutes? I made frantic calls trying to find someone who could take my dogs. I couldn’t find anyone. Except for my service dog, they would all have to stay home that night. I was in tears as we checked and secured every door and window of my house. All I could do was pray they would be safe.

I called my father, who was already en route, and he got the message during a layover. When he arrived, he put on a brave face, but I knew he was afraid for me. He helped me finish packing, and we checked into a hotel. I would never spend another night in that house again.

Continue to Part 4: A House is Not a Home