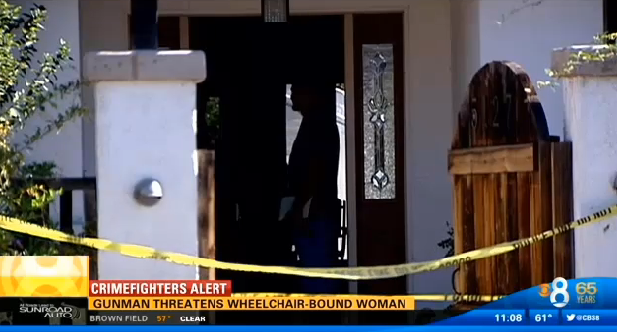 I got up the next morning feeling numb. I had slept for a few hours, but kept waking with my thoughts racing, imagining what would’ve happened if C hadn’t been there. Would he have beaten me? Raped me? Tortured my dogs? Or just made me lie there helplessly and watch as he took everything I own? Every time I closed my eyes, I would see these things. Some nights, I still do. My Facebook was flooded with well-wishers, saying it was fortunate that I wasn’t hurt. I knew I was lucky to be alive, but I didn’t feel fortunate at all. I felt afraid lying in my own bed. How could I ever sleep again, knowing that someone could be waiting?

One of my other assistants arrived, and C left to return to her family. I immediately went to do the only thing I could think of to protect myself: buy security cameras. I purchased a top-of-the-line system, and a sympathetic store manager arranged for it to be installed the next day.

I knew I couldn’t be home alone, not for a long time. My father made plans to arrive on Monday. I spoke to the detective, sharing more details and reiterating my suspicions about J. That evening, my best friend and his fiancee came down from L.A. to stay with me. Having them, my friend’s registered handgun, and their extra-large protective dog in the house gave me some comfort, and I slept better than I expected that night.

The next day, the installers set up my security cameras. I could see every angle of my yard, and all the places inside where valuables were stored. If someone tried to break in, or another assistant tried to case my belongings in the future, I would know about it. Still, I reasoned, I had little to worry about. By now, the police would be calling and questioning the suspects, and they’d be lying low or running scared. But then I got a phone call. It was Home Depot’s fraud department, asking whether I had just purchased two gift cards. I had not. I asked the customer service rep what email address was used to buy them, and it was one I didn’t recognize. He canceled the charges, and suggested that I call my credit card company.

As soon as I hung up, I grabbed my purse. Had the intruder stolen my cards? No, he had never gone into my home office where my purse was kept. I had used that card to buy my security cameras – and there it was, still in my wallet where it belonged. I called the credit card company and asked them to list the last several charges. I hoped the Home Depot was an anomaly or mistake, but there were more – two gift card purchases from Walmart, and a charge to Intelius, a personal information search service. I felt the hair on the back of my neck stand up as I realized that this was no coincidence. Someone had written down my credit card information while working for me, and was now using it. It had to be connected to the robbery.

I called the lead detective immediately, and he took the information and said he would look into it. I remembered that a credit card had gone missing the first weekend J worked for me, and mentioned that too. Now in retrospect, I was sure she had stolen it, but never got the chance to use it because I caught on so quickly. They didn’t get what they wanted in the robbery, so they decided to use my card, I thought. I was concerned, but figured that after failing to get anything from my credit card, they would move on. With my friends staying another night and my dad scheduled to arrive the next day, I felt supported and as safe as I could under the circumstances. I remember thinking to myself: Tomorrow I will begin to resume my life. Tomorrow I’ll start to heal.