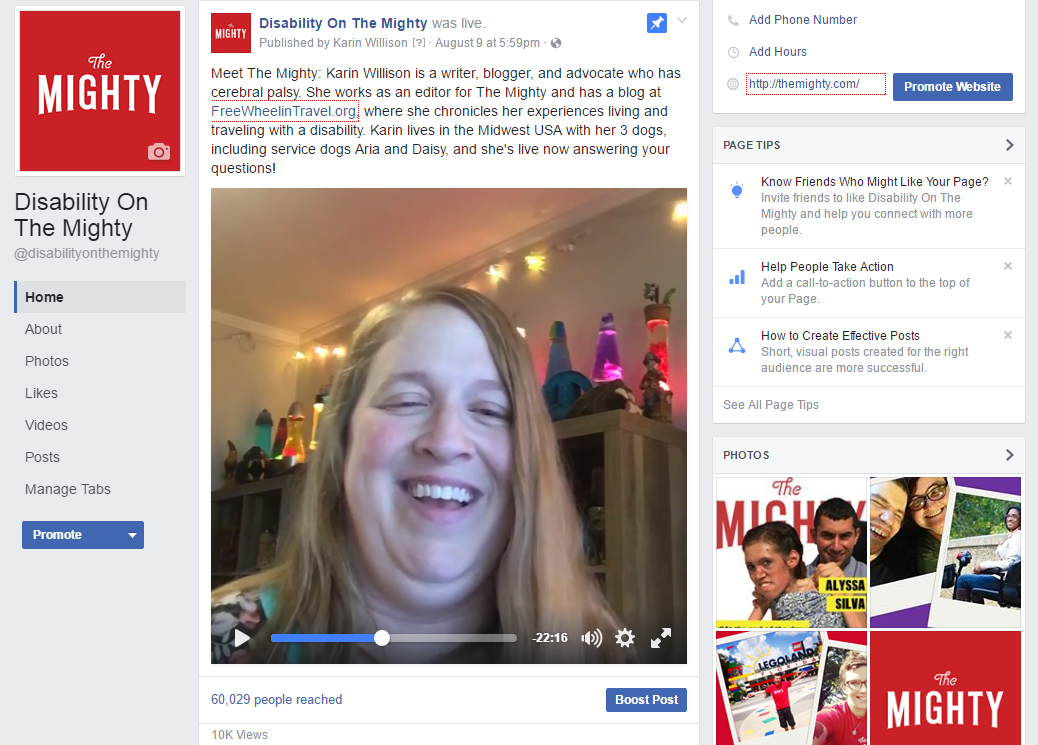 I recently did my first ever Facebook Live stream. My employer, The Mighty, has been inviting staff and longtime writers to make live appearances on the company Facebook pages and answer questions about our disabilities, special areas of interest or expertise, and more. When we were invited to sign up, I instinctively jumped on it. Of course I wanted to answer people’s questions about cerebral palsy, and offer hope to parents of young children. Of course I wanted to promote my blog and show other people with disabilities that we can travel and have an awesome time. But there was just one problem. To do so, I had to go on camera, live.

I’m far from a stranger to appearing in the media. When I was a kid, I was in the newspaper and on TV many times, mostly talking about service dogs, which were a relatively new phenomenon at the time. People needed basic education about what a service dog could do, and who better to teach them that a cute little blonde girl in a wheelchair? I even had the chance to appear in a service dog commercial with Snoopy! When I wasn’t on the news, I was speaking to various charitable groups, schools, and companies about service dogs and my life with a disability. I also appeared in my share of school theater productions. I was very comfortable speaking in front of crowds.

I still am, but a lot has changed since then. Honestly, I’ve never been able to look in the mirror and really love what I see. But there was a period of a few years during my 20s when I kind of liked how I looked. I got Lasik and ditched the thick glasses, I developed a fun sense of style, and I was proud of my long, beautiful hair. I gained a lot of confidence, and was in a good place in my life.

Unfortunately, all that came crashing down when I got into a long-term relationship that became abusive. Like many abusers, she knew how to find my insecurities and use them to tear me down. My appearance was one of her chief targets, especially after I gained weight due to being stuck in the house all the time because of her controlling behavior. She turned me against myself, and made me feel ashamed of my body. She even managed to make me feel like being an outspoken advocate, the core of who I am and everything I stand for, was harmful. Bit by bit, she tore away at my self-esteem until I had nothing left.

Thankfully, with the support of friends and family, I was eventually able to escape that terrible situation. I had almost completely lost myself, but somehow hung on with the fierce strength that still survived within me. The road back to wholeness hasn’t been easy, but it didn’t take long for me to proudly re-embrace my activism; in fact I’m more dedicated than ever to helping other people with disabilities. What happened to me has happened to far too many others, and the only way to fight it is to teach kids and adults with disabilities to accept and love ourselves.

Now, several years later, I feel more secure in who I am than I ever have before. I like the person I am on the inside. I think I’m the best me I’ve ever been. But I can’t say the same about the outside. When I look at myself, I see a body that still shows the physical effects of surviving psychological trauma. I don’t see a body that reflects my soul. It’s not that I want to look perfect. But what I see isn’t me. Or at least it wasn’t, until my Facebook Live event.

Going on Facebook Live isn’t like having someone take a picture, or even film a video of you. It’s like one extended selfie where you’re watching yourself the whole time and can see every little flaw — the double chin, that quirky way you move, and that spot on your face you desperately wish would go away. Well not you, those are mine. But we all have them. Other people may not even notice them, or care if they do. But these “flaws” can chip away at our self-esteem, even when we promised ourselves we’d never let anyone or anything do that again.

As I began the stream, all I could do was try to ignore those feelings. I was there for a reason, to share my story and help people, and that was more important than how I looked. But when I watched the recording afterwards, I realized something surprising. I didn’t hate how I looked. I liked my choice of shirt, my hair, my eyes. But most of all, I liked my smile. It was real, and it showed what I was truly feeling in that moment — happiness. I was happy to be exactly where I was, doing something valuable for myself and others.

Of course it wasn’t perfect. I answered some great questions, but there was so much more I didn’t get to talk about, including surviving violence in various forms, being disabled and part of the LGBT community, and my experiences working while receiving disability benefits. There were friends I wanted to mention and acknowledge, but didn’t, and so many more stories I wanted to tell. But I’ve overcome that first hurdle. And now that I’ve done this, I know I can do it again. No, I won’t be one of those people who is constantly live and showing the mundane details of their life. But when I have something to say or something to show the world, I will. I know I can do this now. And I’m starting to like the person I see in the mirror — flaws and all. 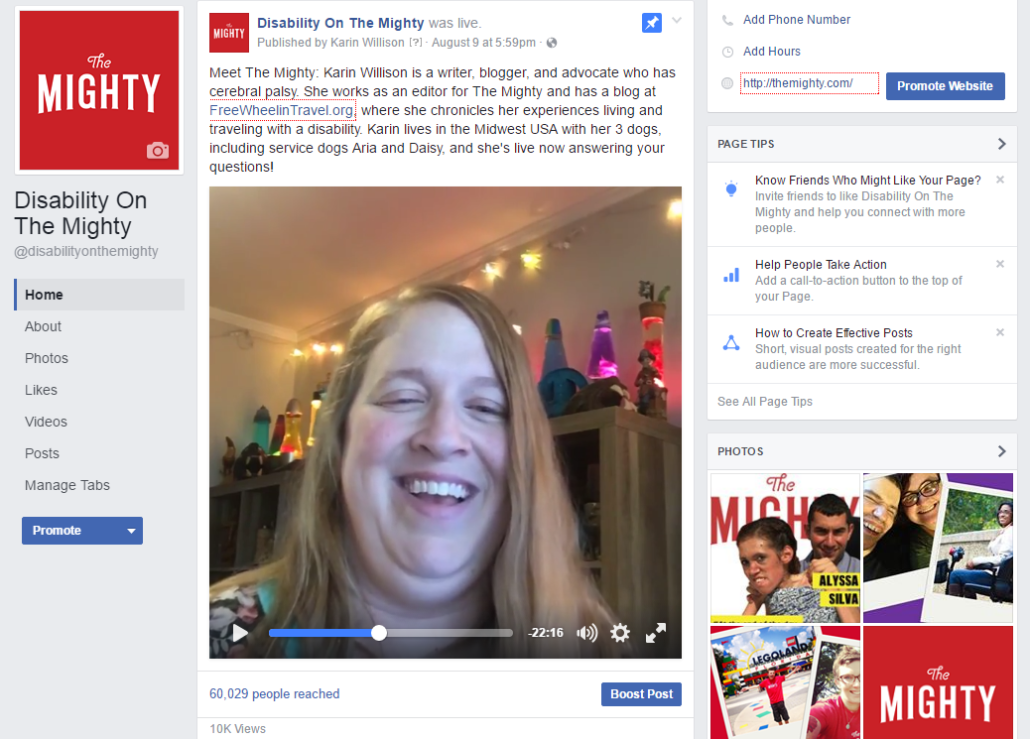