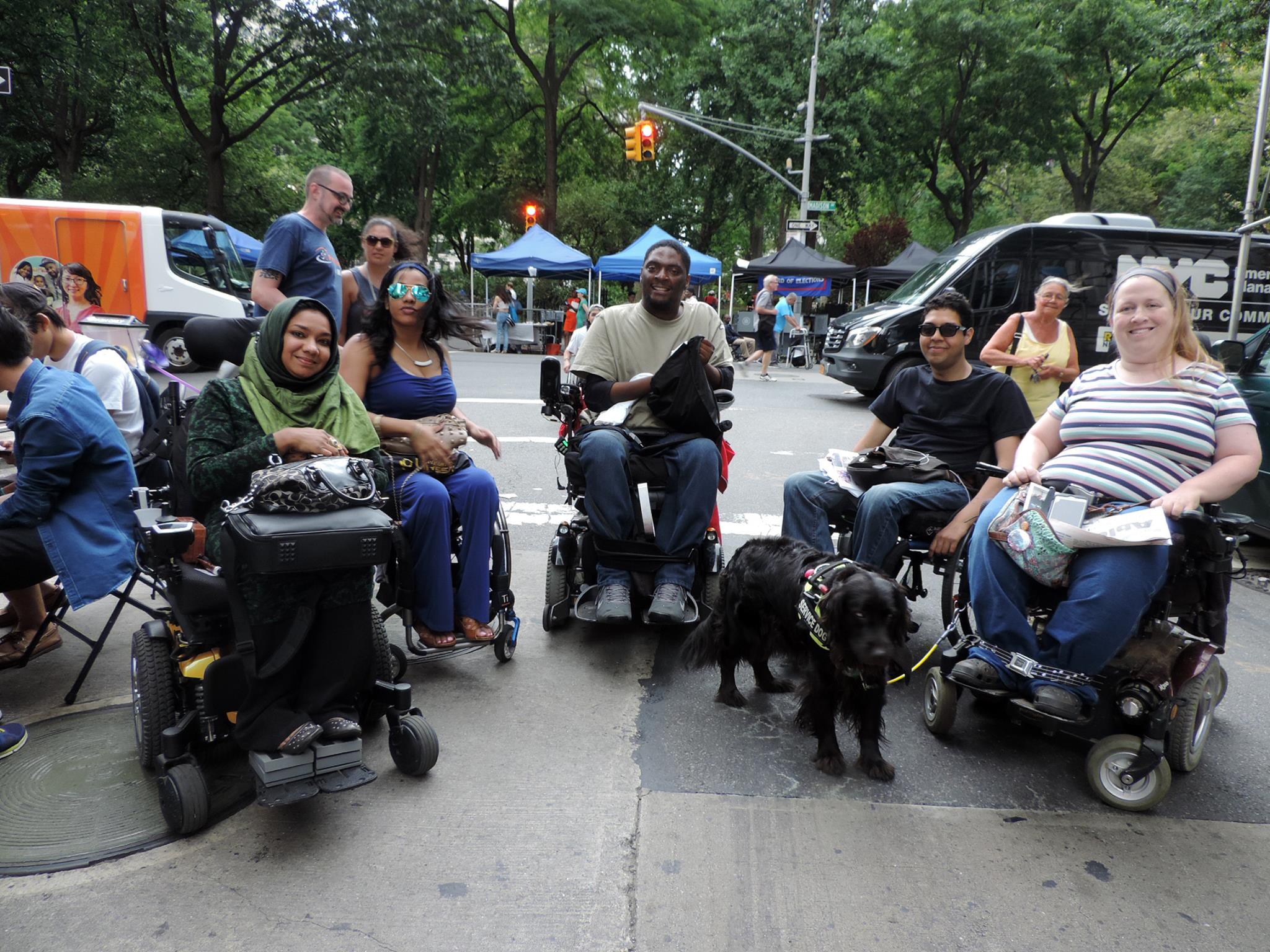 On July 10, 2016, I had the opportunity to attend the second annual Disability Pride Festival in New York City. It was an amazing opportunity to connect with people, and made me think about my disability and the lives of people with disabilities in ways I hadn’t before. 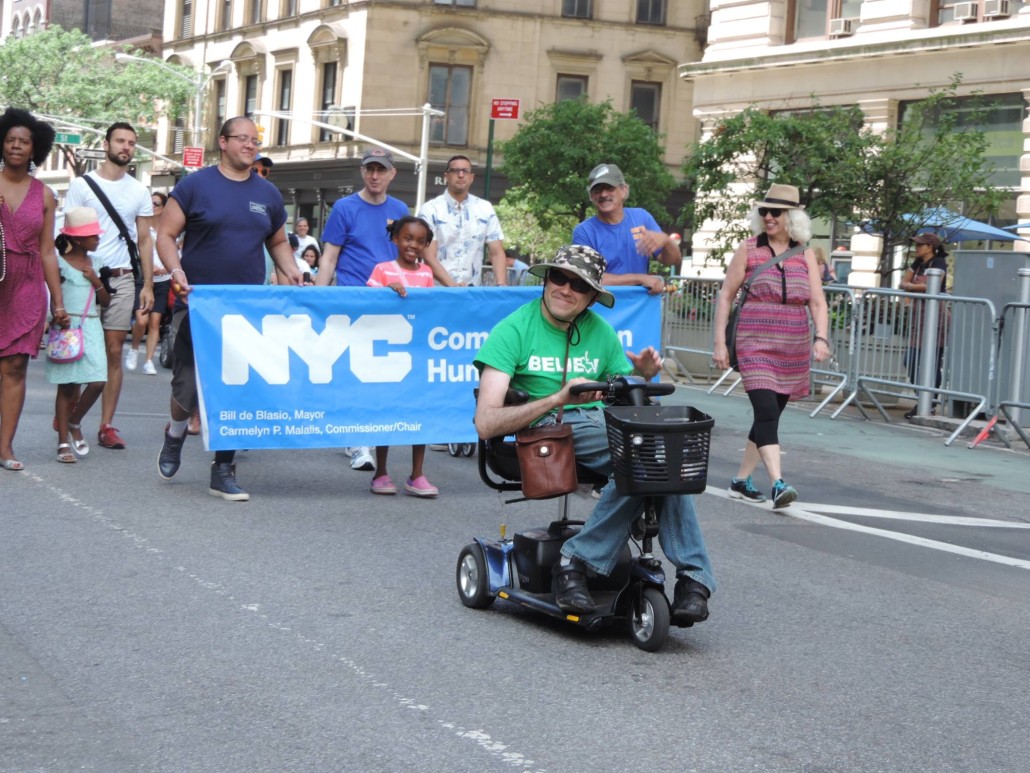 As people with disabilities, we are in the minority. One in five people has a disability, so it’s hardly a rare circumstance, but those of us who use wheelchairs full-time often go through large parts of our life without meeting more than a few people who are like us. It can be lonely and isolating. We also miss out on key information and cultural building that can only take place when many of us are in the same space together. Yes, we have the Internet, but it doesn’t fully take the place of talking to someone in person, seeing how they move, what mobility device they use and how they’ve modified it to suit their unique needs, and how they live their lives. We can learn so much from each other when we have the opportunity.

At Disability Pride, I quickly realized that I had never before been in a space with so many other people who have disabilities. The most I had previously experienced was the Abilities Expo, which is a valuable event, but focused more on products than community building. This was different; it was a chance to talk to people, make friends and gather information I couldn’t find anywhere else.

It wasn’t easy at first. Although I wouldn’t classify myself as shy, it usually takes some effort for me to approach strangers. In the last couple years, though, that has started to change. Everything I’ve been through has reminded me that life is short and we have to take advantage of opportunities when they come our way. So I just started going up to people, saying hi, and starting conversations. 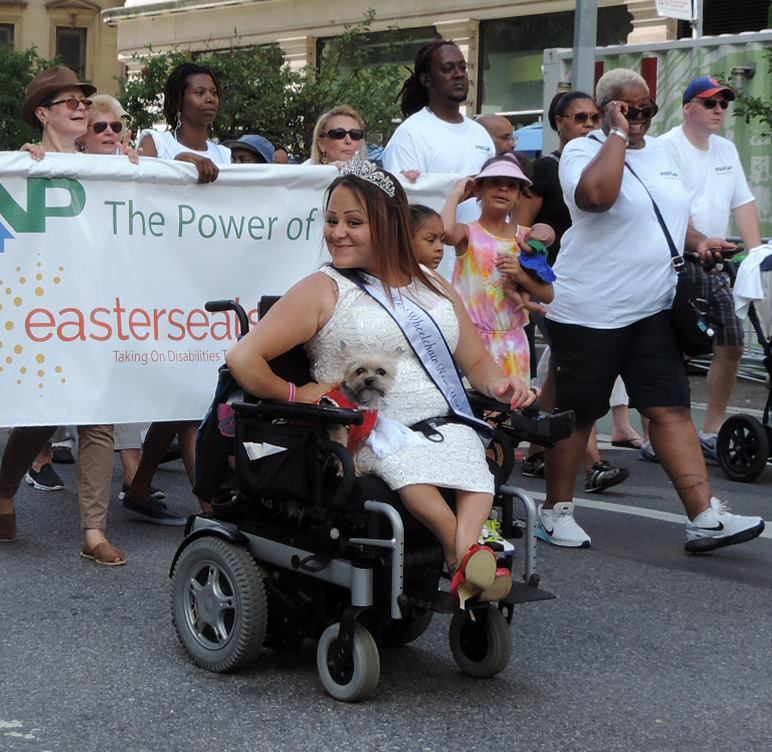 I said things and asked questions I wouldn’t normally ask a stranger, because I felt like we were in a place to share ideas. For example, I asked several people what they thought about their power wheelchairs. I’ve been unhappy with mine, because it constantly feels like I’m tipping forward when I go down a ramp or encounter a small drop at a curb cut. I was so glad I did this, because several people told me the same thing: it’s because my wheelchair is center-wheel drive. Although they turn more easily in small spaces, they are less stable outdoors. This was my first center wheel drive wheelchair, and no one told me before I got it; in fact, I had watched videos giving the impression it was great off-road. Now I know the truth, and for my next chair, I’ll choose a better option.

Disability Pride offered a great opportunity to network and learn more about the changes and opportunities for people with disabilities in the NYC area. It’s information people desperately need. I’ve traveled all over the United States and Canada, and New York City is the worst major city for wheelchair access I have ever encountered. But there are signs of improvement.

The first time I visited in 2010, I never saw a wheelchair accessible cab. On my last two visits in 2016, I saw at least one, and usually several, every day. At Disability Pride, I got the chance to meet a representative from the Braun Corporation, which designed the accessibility adaptation for the Nissan 200 “taxi of the future”. They had a demo taxi on hand to show how it works and allow people to test the experience. This gave me tremendous confidence in the future of accessible transportation in NYC. Although the City has a long way to go to reach its goal of 50% accessible cabs, I felt much better about the availability of taxis, and I’m going to try utilizing them more on my next trip.

Despite the terrible access problems, I adore New York City. I’ve been thinking about moving to someplace fairly nearby for the past couple of years. But moving isn’t easy when you have a disability, especially if you require Medicaid waiver services for caregivers like I do. Every state has its own rules and quirks about how much help you can get, how easy it is to get the help you need, and how much money you can earn from working while still receiving benefits. Unfortunately, it can be difficult to find this information, even online. Each state program has its own name, and some states have multiple programs. There is no central clearinghouse for information about services by state. Plus, official information doesn’t always tell the whole story about the program in practicality. What services are covered? Are caseworkers helpful, or is it an uphill battle to get many hours of care daily?

Thankfully, I found out some more details by talking to several people at Disability Pride. Everyone said services in New York are really good. They didn’t think New Jersey was as good. No one knew much about Connecticut. Lots of people praised Massachusetts… but that’s a bit far from the lights of Broadway for me to feel it’s worth uprooting myself from where I am now. 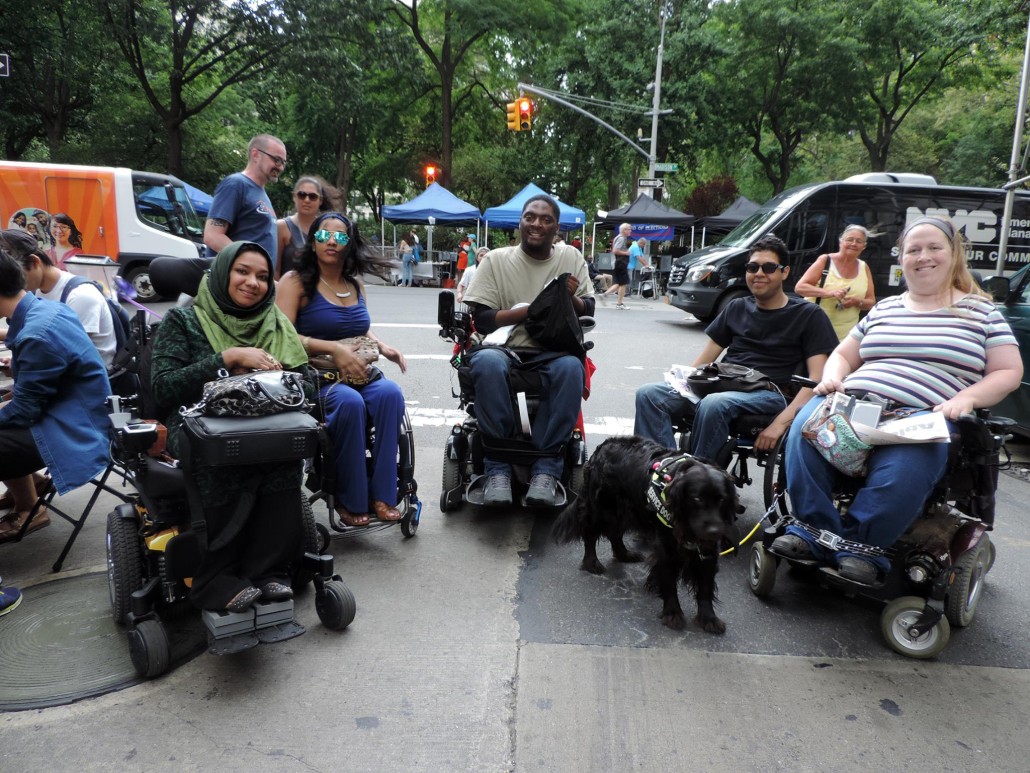 Me with a group at Disability Pride NYC. Photo by Michele Kaplan / Rebel Wheels NYC

Disability Pride gave me the chance to see the talent and diversity of our community firsthand. The main stage featured many wonderful performers, including the thought-provoking Anomie Fatale, but there were many other smaller but no less important demonstrations of skill and talent as well. I ended up hanging out for a while with a friend at the face and body painting booth, where Israt Noor drew beautiful henna temporary tattoos. My friend Michele Kaplan took the pictures I’m featuring here, her photographer’s eye capturing small moments of beauty and kindness that many would overlook. 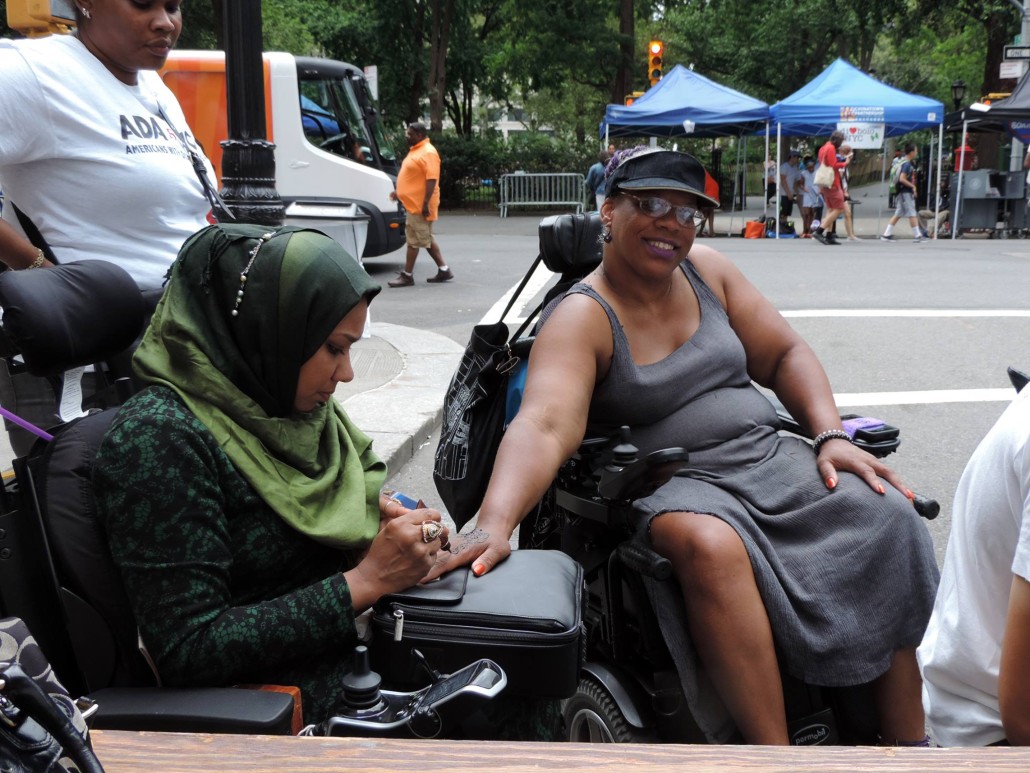 As I looked out at the crowd of people of all ages, some with wheelchairs and canes and prosthetic limbs, and some whose conditions were not visible to my eye but no less significant, I pondered the meaning of disability pride. What does it mean to have disability pride?

As a child with cerebral palsy, I didn’t want to have a disability. My parents were obsessed with trying to fix me with physical therapy, to make me as “normal” as possible. After watching “Cinderella,” I would often wish that the fairy godmother would magically appear and give me the ability to walk. But something inside me also fought the excessive physical therapy. I was often uncooperative. I felt controlled and like I never had the freedom to be myself. In my heart, I just wanted to be accepted and loved as I am. Eventually, my parents came to understand. My mother became a disability rights activist, met many successful people with disabilities, and realized that I could live a full life without being “cured.”

After what I went through, it wasn’t easy to accept myself. I went through periods of anger, at my parents and at the doctor whose negligence caused my disability. I never gave up on my dreams, but my self-esteem was low, and it led me into bad situations, like an abusive relationship. Even though I have the relative privilege of being white and from an upper-middle-class family, I’ve been a target for abuse and violence because of my condition. My life hasn’t been easy, and it’s still hard for me to look at my body and like what I see. But I do like the person I am. I’ve accomplished a lot despite the challenges I face. I’m proud of that. 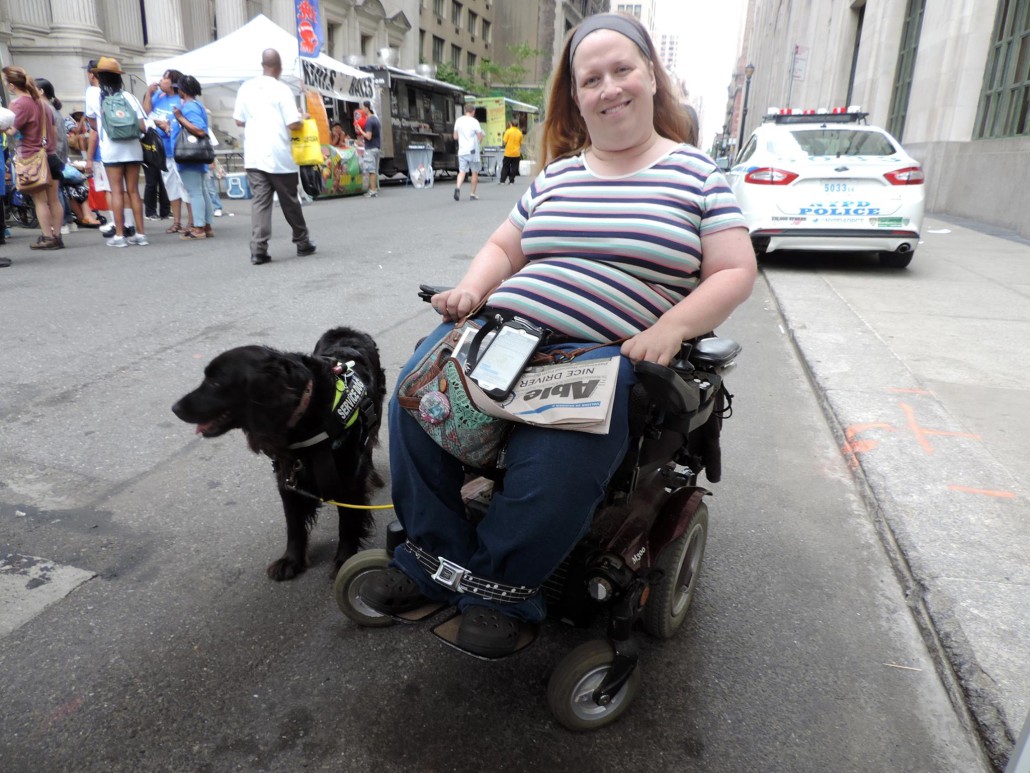 Am I proud to have a disability? Yes. I don’t feel ashamed of it at all. Although my disability doesn’t fully define me, it has greatly influenced the person I’ve become, and mostly for the good. It’s made me more compassionate and aware of inequality, and dedicated to activism and creating change. If I woke up tomorrow and didn’t have my disability anymore, I would feel like something was missing. It’s part of me, like my blonde hair and blue eyes. But I also don’t think pride requires loving every aspect of one’s disability. Although I feel that 90% of the problems I face relate to other people’s ignorance and prejudice against people with disabilities, that other 10% matters too. Chronic pain, needing a caregiver to help with basic tasks — I wish those things weren’t part of my reality. But I’m also proud of how I deal with them.

In addition to having a disability, I’m part of the LGBT community. So I’ve thought a lot about pride, and I feel pride as a queer woman. It’s similar to, but not the same as, my disability pride. It took me a long time to accept my orientation; I kept thinking I didn’t want to be a lesbian, because I had enough problems already as a person with a disability. But of course, like disability, it’s not a choice. The only choice is between loving yourself as you are or being miserable. I choose to have Pride! 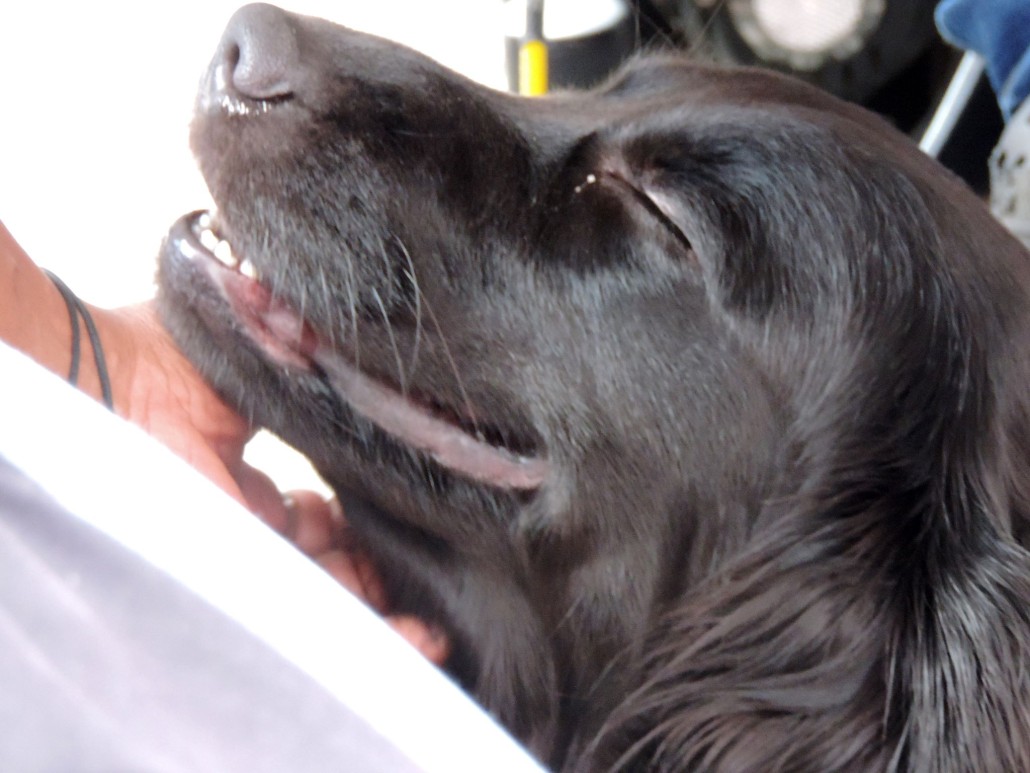