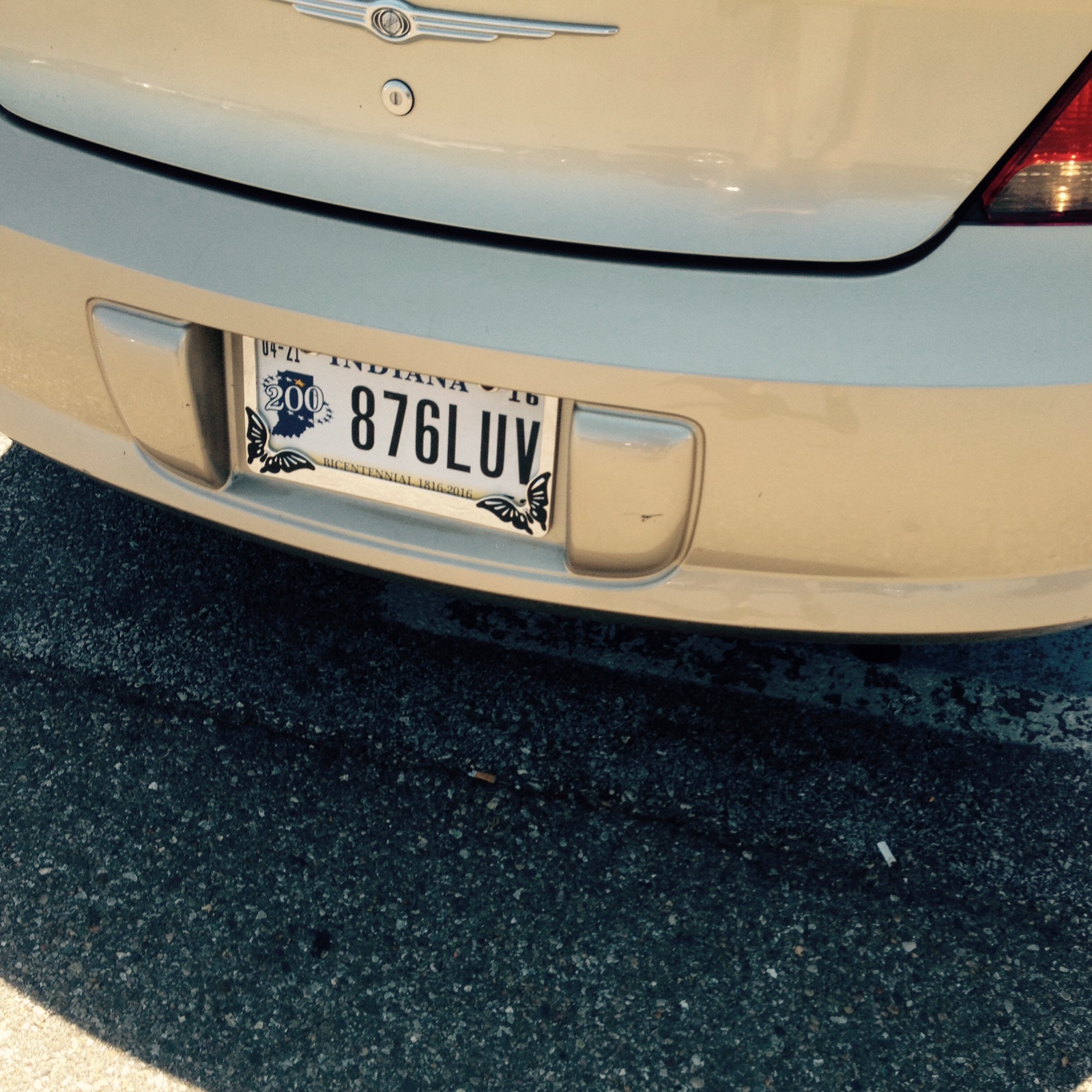 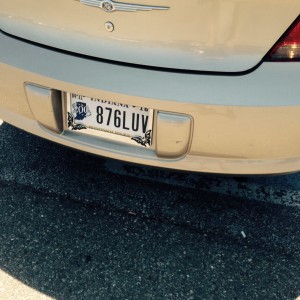 This is the license plate belonging to the people who made obscene and hateful threats when they were confronted about parking illegally in a handicapped space. Plate Indiana 876LUV (no love in their hearts, though!)

Today I and my caregiver were verbally assaulted and threatened using homophobic and ableist/anti-disabled slurs in a parking lot by a couple who were parked illegally in a disabled parking space. I politely confronted them about not having a plate or permit, and they responded with vicious hatred. We were both shaking afterwards.

At approximately 2 PM today I arrived at Petco in Bloomington, Indiana to buy some dog food. My caregiver S and I witnessed a car parking in one of the disabled spaces that appeared to not have a disability license plate or permit in the window. I went around to the front of the card to make sure there wasn’t a tag sitting on the dashboard or otherwise difficult to see, and there wasn’t.

I saw a man, woman, and girl about seven years old get out of the car. None appeared to have any disabilities. I politely asked if they had a permit to park there. The woman immediately looked flustered, guilty, and irritated. She hastily responded that she was disabled and not to worry about it. I asked her why if that was the case, she didn’t have a permit? She got even more defensive and then walked away. It was obvious that she was lying.

I entered the store and immediately went towards the check out area to find a manager who could summon a security guard. Unfortunately, it appears that the building didn’t have security. Meanwhile, I asked S to take my phone and get a picture of their license plate. A few seconds after I sent her out, I saw them hurrying out the door.

Here is what happened next, in S’s words.

“Moments later, the two people exited the store — the woman was pulling he daughter roughly by the arm and berating her loudly. The man turned to me, thinking that I worked at the store and said “Do you work here? You all should get some real security instead of some handicapped woman.” I told him that he needed to leave, repeatedly, and the two started getting angry and insulting me. I told them to fuck off, and they started back in on me, saying “What are you? You fucking dyke bitch.” “Fucking homo dyke.” and various other insults. I challenged her, telling her to watch her language, and walked up to her. She said, “You want to hit me? Go ahead and hit me, I’ll call the cops on you, you fucking dyke bitch.” I wanted to slap her across the face, but because I was with Karin, I decided against it. I placed my hands on her door and told her to leave, and she pushed her door against me forcefully. She was red in the face and spitting.”

At that moment, I went back outside. I witnessed the woman yelling at S and trying to hit her with the car door. I told her to move away, and I would call the police. S then went around the back of the car to get a picture. They got in and started to back into her. Thankfully, they didn’t hit her. I told them that I would be calling the police to report the incident, and then the woman began insulting me. She yelled “Fucking handicapped bitch!” at me as they sped away.

I have filed a police report and got a callback from an officer who said he will look into the matter. I’m not sure what they can do, but I’m certainly willing to testify that I saw them parking illegally in a handicapped parking space, and submit my photo as proof.

I don’t know these people’s names, but the above photo is their license plate. They drive a light tan Chrysler sedan. Both are Caucasian and appeared to be in their late 30s. The man had short dark hair, stocky build, not tall, and was wearing a blue shirt with a design on it and shorts. The woman had medium brown hair, also stocky/overweight and wearing a pink tank top and white shorts. Their daughter is about seven years old with blonde to light brown hair.

If you know or do business with them, please be aware that they are anti-gay and threatened my caregiver based on her sexual orientation. They also yelled hateful insults at me based on my disability, despite claiming to have a disability themselves.

HOW YOU CAN HELP:

If you witnessed the incident (I know a few people did) please e-mail me: karin@freewheelintravel.org – if you’re willing to contact the police, it might help them to identify them, and add backup to our statements.

I am offering a $20 donation reward for information that will allow me to identify these individuals. The information will not be used to harm them; I don’t wish to respond to hate with hate. Instead, should they be identified, I will post their names and invite everyone to make a donation to a LGBT or disability related charity in their name. Perhaps receiving notifications from these organizations about good being done in response to their evil will change their perspective.