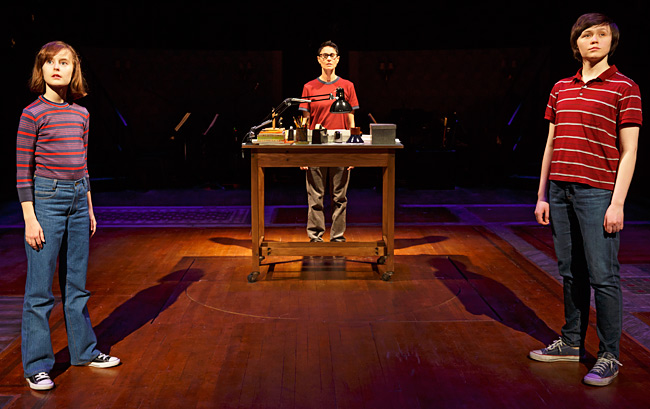 Broadway was once a very rich, white, straight world. Despite the many gay men in theater throughout history, until recently, the majority of musicals have reinforced the values of a white male, hetero-normative society. It’s only been in the past few decades that more diverse voices have really been heard, that realistic stories of strong women, LGBT people, the working class, and people of color, have been told openly and authentically by people from those communities. 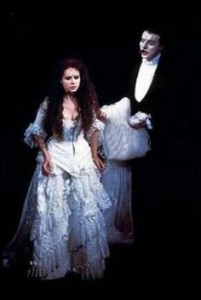 When in story after story, the person who is different rarely gets their happily ever after, you begin to believe that you won’t, either.

In his essay and review The Wanderers: Outsiders Take Center Stage, New Yorker theater critic Hinton Als points out that “musicals almost always argue in favor of the status quo.” Tony and Maria can’t escape their Romeo and Juliet star-crossed destiny. Poor Jud is dead. The Phantom doesn’t get the girl. Everybody fighting for change in Les Miserables ends up dying in a hopeless battle. It can be argued that tragedy creates greater sympathy, that it makes us as an audience want to carry the story’s message into our own lives and make the world better. But for me, as a minority in multiple categories, there’s a deep-rooted sadness and anger that comes from only seeing yourself in characters whose fates are tragic. When in story after story, the person who is different rarely gets their happily ever after, you begin to believe that you won’t, either.

I was fortunate enough on my recent trip to see two shows that would never have been on Broadway 20 years ago. Now, they are not only enormous hits, but won multiple Tony awards. Each features a main character who is profoundly different from the status quo, but overcomes tragedy and ends the piece with greater wholeness and self-acceptance. 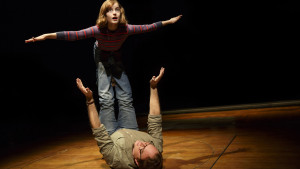 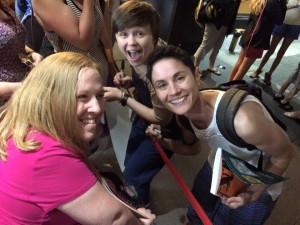 Me with 2 of the lovely Alisons – Emily Skeggs and Beth Malone. All 3 were amazing!

Fun Home, which swept this year’s Tony Awards, is the first Broadway musical with a lesbian protagonist. Based on the Alison Bechdel graphic novel of the same title, it is the author’s personal memoir of growing up in a family with a troubled, closeted gay father, and discovering her own identity. In every element of its design, music, and production, the show confronts and demolishes the notion that we should uphold the status quo. For a start, it’s a small cast, and eschews many Broadway tropes such as a chorus and big dance numbers. It uses songs when they make sense, rather than following a formula. The big showstopping number goes to an 11-year-old girl. The “in the round” setting of the Circle in the Square Theater brings the lower-seated audience into the story, as if they are part of the family, but from the upper seats, such as mine, it gives the stage a dollhouse-like quality. It felt as though an invisible hand was moving the actors around the stage, placing them in each scene or frame, like a comic book panel.

Michael Cerveris, gives a subtle yet complex Tony-winning performance as Bruce, Alison’s father. A lesser actor could have rendered the character wholly unsympathetic, but Cerveris never loses sight of the inner turmoil that drives Bruce to alienate himself from his family and community. We are able to understand and feel compassion for him, without condoning his actions. Despite his tragic end, Bruce is not sacrificed on the altar of upholding the status quo in the big Broadway show. His fate is sealed by the choices he makes, his fear and unwillingness to admit his “outsider” status and accept his sexuality.

In contrast, his daughter Alison wants to embrace her difference, long before she fully understands it. Sydney Lucas as young Alison gives an amazing performance, perfectly capturing that transitional moment in a child’s life when she catches a glimpse of her adult future, and begins to realize the meaning behind all the confusing emotions inside her head. Emily Skeggs as college-age Alison picks up where her counterpart leaves off, nervous and scared at first, but then bursting with happiness when she experiences the freedom to be herself. Meanwhile, Beth Malone as adult Alison observes the proceedings from the distance of time, secure in her identity, but keenly aware of the secrets and losses that left their mark on her family. The message is clear: Be yourself. If you don’t, it will destroy you from the inside, and those around you, too. 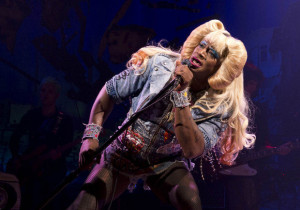 The theme of rejecting society’s expectations and embracing one’s genuine self is presented in fabulous, glittery glory in one of Broadway’s other current blockbusters, Hedwig and the Angry Inch. This longtime cult favorite was off-Broadway in 1998, and made into a film in 2001. It was a classic case of a show ahead of its time – Broadway then wasn’t ready for an outrageous, outspoken transgender main character, who wasn’t watered down for the masses. Now the masses, or at least enough of us, have evolved, and Hedwig has won her Broadway debut. 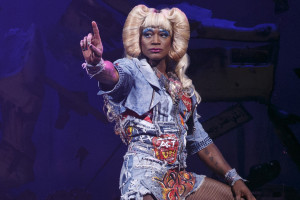 One of the ways in which the Broadway production of Hedwig has challenged traditional expectations is with its casting of the role. While it follows the modern trend of celebrity casting, the actors chosen have been diverse, encompassing a wide range of sexual orientations and gender expressions – although all, so far have been biologically male. I was fortunate enough to see Taye Diggs perform on his second night in the role. Although he was still finding his stride, he brought a unique perspective, an intensity of stage presence that differs from previous actors. He’s the first Black actor to play Hedwig, and didn’t shy away from confronting it, add-libbing jokes about his race, past acting roles, and ex-wife Idina Menzel, with Hedwig’s campy, inimitable style. Some might find him too masculine for the role, but I felt that in some ways, Diggs brought more depth to Hedwig’s duality and inner conflict. Hedwig is a character who defies traditional boundaries of gender, but was constantly defined by others. Hedwig only becomes free after shedding all of society’s trappings of gender, and transforming into a pure, whole being. 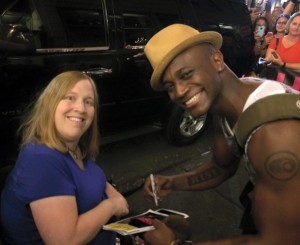 Me with Taye Diggs

Hedwig is the ultimate outsider, and yet someone we would do well to accept, even emulate. Wouldn’t it be a beautiful world if we didn’t have to define ourselves by societal roles? If every person could love without judgment, without regard to any physical characteristic, only the meeting of souls? That is the truth of the origin of love. We become whole by finding the missing parts of ourselves, the aspects that we struggle to accept. Only then are we truly able to love others.

Broadway is for the masses. Perhaps it always has been, but it’s even more so now. Getting to a show involves braving the crowds in Times Square, and surrounding yourself with people who may know little about theater or the show they’re there to see, except that they paid way too much for tickets. Incidents of inappropriate behavior such as using cell phones during shows seem to be increasingly common and widely publicized. Although this change can be a source of consternation for those of us who are more experienced and educated theatergoers, it also represents hope. For every audience member who behaves boorishly, for every screaming kid, there are another 10 who are there to learn, who are fans in the making. They are the future of this art form. In some cases, these new fans have never been to the theater before because they didn’t think it was for them, because they believed that most of the stories were by and for rich, white, straight people. These are people who want to have their stories told, and increasingly, Broadway is telling them.

This evolution is just beginning. There’s still a long way to go. Many groups are still underrepresented in popular theater, including and especially people with disabilities. Racism and ageism remain major issues in the audition and casting process. But the overall trend is positive. The emotional, transformative force of musical theater is creating beloved new characters who succeed despite being outsiders, who earn a place in the hearts of people from all walks of life. The world is changing, and new voices are being heard, on Broadway and beyond.