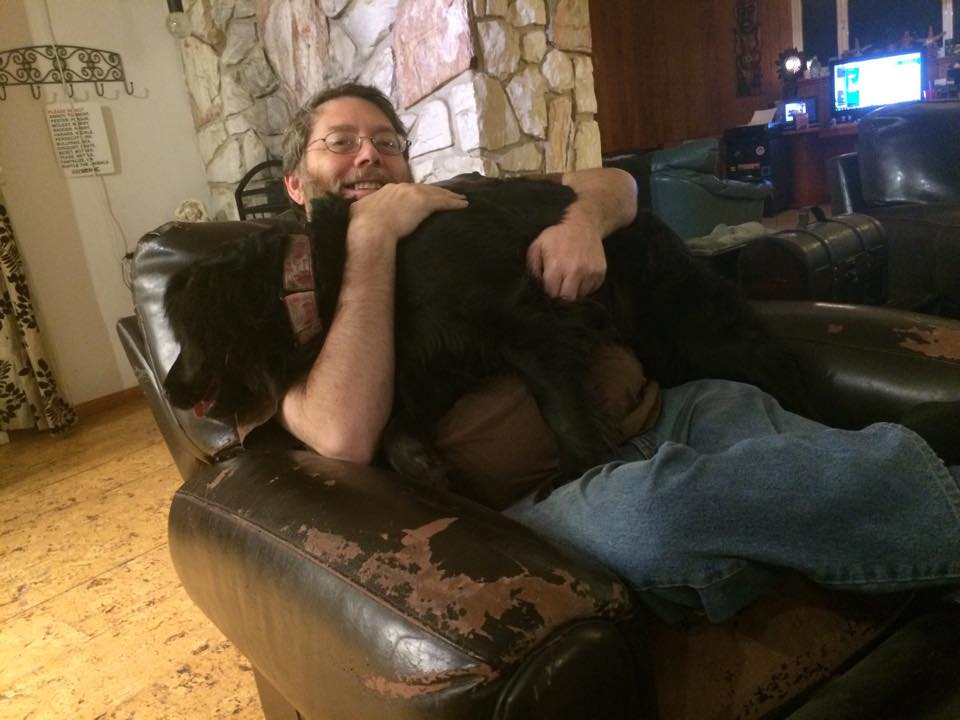 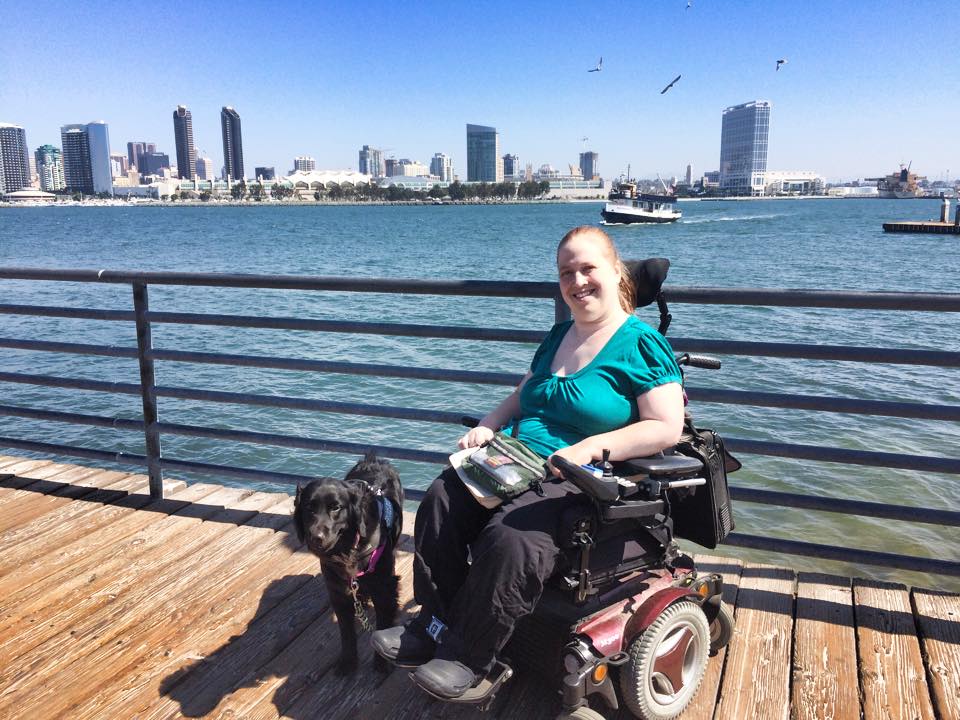 Enjoying my life in San Diego, a few weeks before the attack

It was a beautiful sunny morning when a caregiver and I loaded the van full of suitcases and dogs and drove away from San Diego forever. We were going to a place where I would be safe, though not a place I had ever dreamed I would choose to live. As the days grew cold and the trees grew bare, I felt the crushing weight of fear lifting from me. Along the way, I enjoyed a day in the comforting presence of family and a close friend, in a city where I had considered moving. I still wrestle with that decision, and wonder if I made the right choice to go where I am now. Leaving that city the next morning was one of the hardest things I’ve ever done, almost as painful as leaving San Diego.

I journeyed on through the bleak farm country, into my new future. The days and nights were rough; my caregiver, while well-intentioned, was not an emotionally supportive person, and struggled to handle the stresses of our trip and the mental anguish I was experiencing. I was relieved and exhausted when we finally arrived at the home where I would be staying until my new house was ready. It was a familiar place and everyone did their best to make me feel welcome, but inside I was falling apart. Now that I was safe, the full weight of my grief set in, weighing me down like a blanket as cold and damp as the air.

My best friend holds Aria while visiting me at home. We now live thousands of miles apart.

After my travel caregiver returned home to California, I had to deal with agency caregivers and teach what felt like an endless series of people how to help me with everything. Eventually, I found my own employees to hire. There were arguments with family, and difficult choices to be made about my new house. My body finally gave out and came down with the flu. Still, things slowly came together, and everyone learned to work with and better understand each other. My new life was slowly taking shape.

On January 22, I got the call I had been waiting for from Detective A. The police arrested the man who attacked me. He is the father of J’s child, and we were correct in our suspicions – he is deaf. He is currently facing six felony charges and being held on $400,000 bail. I expected to feel relieved, safer and more hopeful when they finally found him, and in some respects I did. The monster had a name and a face. There was a good chance he’d be put away for a long time. Yet my sense of relief was tempered because J was still free to live her life, while mine is a shadow of what it used to be. 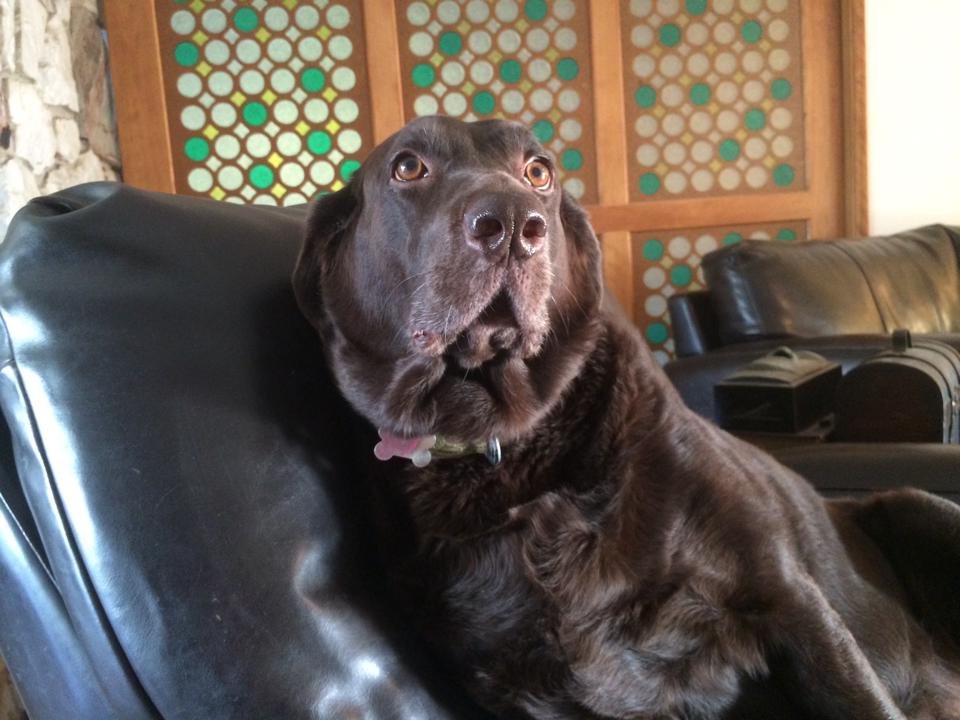 Elphaba lounges in her favorite chair. Behind her you can see my favorite part of the home I left behind, its unique vintage pocket door.

Although the police had been helpful and supportive overall, I felt they had dropped the ball when it came to further investigating and arresting J. They said they need more evidence, that a defense attorney could claim that she accidentally told him information or was tricked into it, but that is impossible. You don’t write down and use someone else’s credit card number by accident. You don’t tell someone the exact cabinet where valuables are kept in your employer’s house, and the location of her bedroom, during an innocent conversation. Those are just a couple of the things he knew and could only have known if she told him intentionally.  I see her as just as responsible, if not more responsible, than him, as she likely planned the whole thing. I trusted her, allowed her into my home, and she knew my life, yet chose to destroy it.

Over the next few months I continued to contact IHSS, trying to find someone who would even return my call. I left messages saying I was robbed and threatened by a former caregiver, but no one seemed to care, and certainly no one helped. In January I finally reached a supervisor at the local IHSS office, who said I should contact the state Public Authority and they would flag J in the system. I did so, but I have no idea whether they’ve actually done anything to prevent her from working for IHSS in the future. 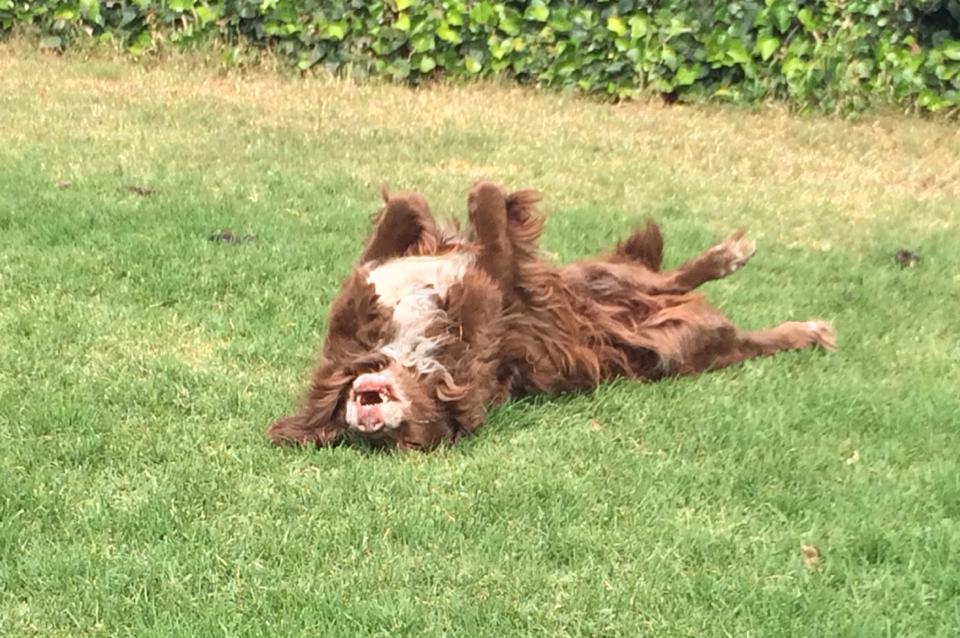 My elderly spaniel Artie rolls in the sunny San Diego backyard. Suddenly moving to a cold climate has taken a terrible toll; he can barely walk now.

To make matters worse, in Dec. 2014 my Advance Pay, a special program where people with severe disabilities receive money to pay caregivers directly, was terminated with no notification or explanation. The supervisor also promised to look into that issue, but as of now, it is still unresolved. I still have not received a check to reimburse me for paying C for her final two months of work.

In many respects I hold IHSS responsible for what happened to me. The program is so poorly managed that we are essentially denied the right to hire a caregiver of our choice. It can take 4 or more months to get new caregivers through the registration process, but Advance Pay funds must be returned within 90 days if they aren’t used. That put me in the position of being forced to hire caregivers who were already registered, rather than the person of my choice.

I found that most of the already IHSS registered caregivers were people I would never hire. Unskilled, poorly educated, lacking in work ethic, I went through several “least awful” choices before hiring J. The state pays such low wages – $9.85 per hour in San Diego, one of the most expensive places in the country – that it is nearly impossible to find a qualified candidate to assist a severely physically disabled yet active and vital person such as myself. Working for IHSS is only attractive to people with no skills or prospects, including potential criminals looking for defenseless victims. 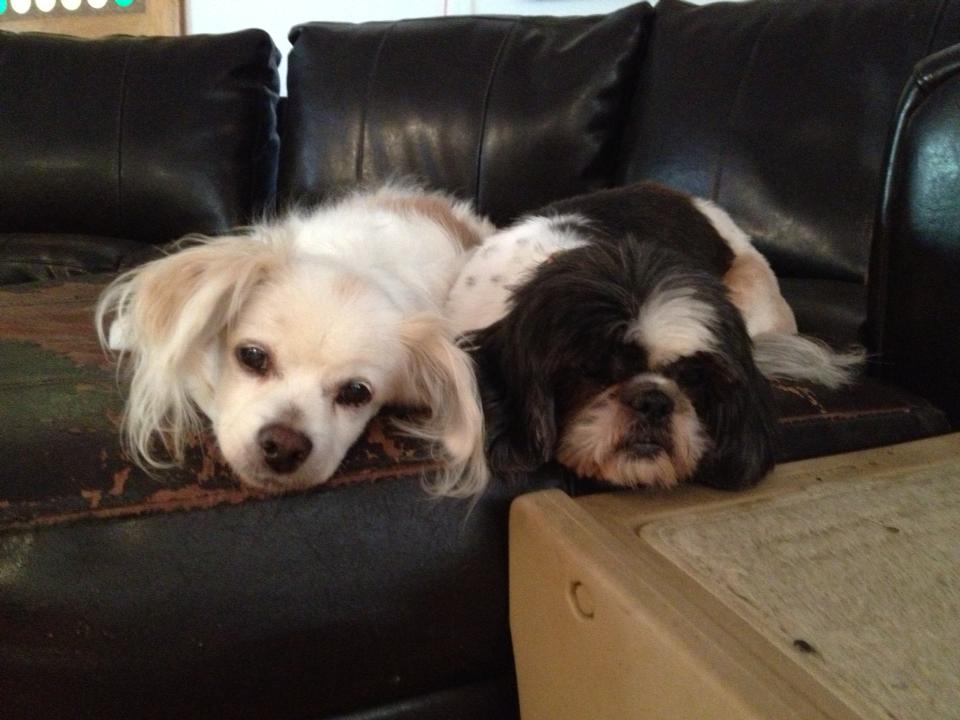 Fiyero, left, had to spend months away from me and is now underweight and ill. Adele, right, has a new loving home, but I miss her so much.

On February 23, 2015 I finally received a call back from my IHSS social worker. This was shortly after I began posting my story on social media and detailing how the problems with IHSS create and contribute to dangerous situations for people with disabilities. She said she would look into my situation and try to get my last two months of Advance Pay plus the several months of back pay I never received. So far I have received half of my back pay, and my call about getting the rest of it has not been returned. Thus far my attempts to get my Advance Pay are failing. They are refusing to issue me a check, and are instead insisting they should pay C – even though I told them I already paid her. I was supposed to be on Advance Pay and should be reimbursed.

I was attacked and my life ruined by someone who was approved by IHSS, who should have been safe to hire and whom I had little choice in hiring due to the backlog in their approval process. Rather than taking responsibility for their failure and doing everything possible to make things right, they have ignored my calls, disrupted payments to my caregivers, and failed to even give me the money I am owed. It’s not right, and those responsible need to be held accountable.