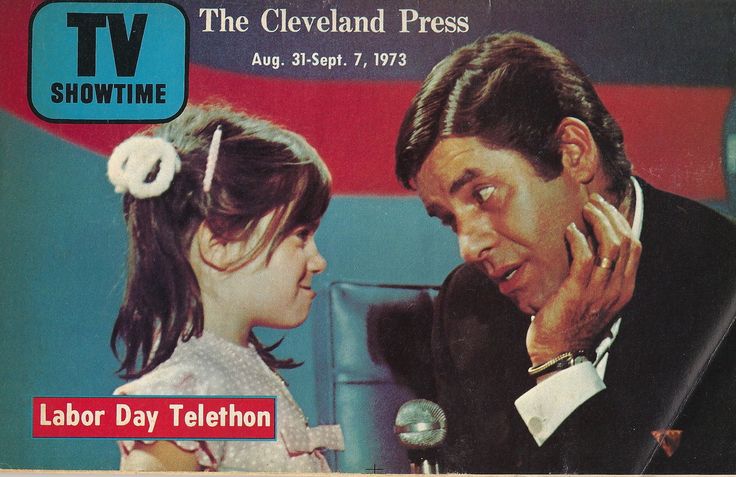 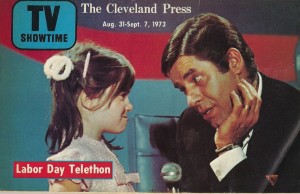 I never got “the look” this Labor Day weekend. No one stared at me, lowered their head sadly, or said “I’m sorry” or “God bless you”. I spent my Saturday out shopping at fairs and festivals, enjoying music and trying not to pass out from the late summer heat. I met a nice guy with a service dog and chatted with him for a while, but other than that, I didn’t think about my disability at all. It’s the first year I can remember that happening. This morning, I discovered the reason why.

This weekend was the first time in 49 years that there was no Jerry Lewis Muscular Dystrophy Telethon. No aging comedians or washed up singers took over a TV network for two days to beg for money. There were no overwrought performances of schmaltzy old songs, no parents parading their small children on stage and sobbing that their child was going to die, while the child sat awkwardly, understanding every word. MDA has stated that the telethon was ended in part because “today’s families, donors and sponsors are looking to us for new, creative and organic ways to support our mission.” That’s their way of glossing over the truth: that the pity-based, emotionally manipulative tactics of the telethon are outdated and offensive in today’s world.

For 49 years the Muscular Dystrophy Association telethon portrayed people with neuromuscular diseases as objects of pity, and viewers were told about all the things they couldn’t do. All people with neuromuscular disease, including adults, were referred to with the patronizing term “Jerry’s Kids.” It was blatantly manipulative and promoted the worst stereotypes about people with disabilities. In one particularly offensive piece in Parade magazine, Jerry Lewis attempted to imagine living with a disability, referred to wheelchairs as “that steel imprisonment”, and said “I realize my life is half, so I must learn to do things halfway. I just have to learn to try to be good at being a half a person … and get on with my life.” Eventually, some adults with MD – who were living very full lives in their communities – began to speak out and demand that Lewis and the telethon update its language and attitudes. The late Laura Hershey’s acclaimed article “From Poster Child to Protestor” provides a comprehensive summary of the issues with the MDA’s depiction of people with disabilities. Jerry Lewis responded to the criticism with vicious hostility, making statements including “Pity? You don’t want to be pitied because you’re a cripple in a wheelchair? Stay in your house!” Those and other outbursts ultimately led to his ouster as telethon host, and the eventual end of the telethon.

Watch the full film “The Kids Are All Right” here.

Beginning in my teen years, I noticed that when I went out on Labor Day weekend and in the month or so that followed, I was treated differently. I got more “I’m sorry”s and “God bless you”s, and strangers would look at me with sadness in their eyes. But that sadness is unwarranted. I don’t have muscular dystrophy. My disability, cerebral palsy, is not life-threatening. It’s caused by brain damage at birth. It doesn’t get better or worse, although physical therapy can help with movement and independence skills, and complications such as joint damage and muscle contractures can occur due to aging. I hope to live as long as everyone else. But all of this information isn’t available to a person who sees me on the street or at the grocery store. They just see my power wheelchair and my physical differences. If their framework for understanding that is pity, then pity is what I’ll receive. And when we are pitied, people with disabilities, including muscular dystrophy, won’t be treated equally. We won’t be seen as capable of living independently, of pursuing higher education, of being employed, or doing anything other than going through life depending on charity. We deserve better.

Please don’t misunderstand; I strongly support research and services for people with muscular dystrophy. I had two childhood friends with forms of MD who sadly are no longer with us. Many amazing people have been taken from our world far too soon because of muscular dystrophy. Nothing in this post is intended to minimize or downplay the magnitude of that loss to their families or to our world. We must continue to do everything possible to find treatments for these diseases. But we must present and treat the people who have them with respect, as equals and in no way less than others because they have a life-threatening condition. Telling children they will die in front of millions of viewers, and devaluing the lives and capabilities of people with neuromuscular disabilities by emphasizing what they can’t do rather than what they can, does not help them. You know what does help them? Affordable healthcare and equipment such as wheelchairs. Accessible vehicles for kids and adults to get to medical care, school, work, and fun. Fair pay for personal care aides and home nurses so families can get a break, and adults with MD can live independently in the community. Employers that will hire adults with MD. That’s what we need to see on TV – MDA helping with those things, and people with neuromuscular diseases living longer and better lives because of it.

The MDA has been trying to improve its image in recent years. Their latest publicity materials and family stories are much improved over the telethon cheese of yore. For example, here’s a realistic and positive story told by an adult man with SMA. Quite ironically, their site has a prominent link to a style guide for journalists writing about disability, which cautions against using negative language such as afflicted and confined – words that in the past were pervasive in society due in large part to the telethon’s influence. They are indeed getting better, however, in some ways, they still miss the point. Consider this video, about a bright young girl with spinal muscular atrophy type 3.

Thanks to the MDA, she’s getting good medical care, and she seems to have the braces, wheelchair, and equipment she needs. A local fire department volunteered to build a ramp for her home. All that is positive. But then the video takes a sad turn. Her family mourns all the things they say she can’t do, and says “She won’t ever be able to have a little bit of a normal life.” Many of her friends have abandoned her. We see the laborious process of getting her into the family car. These things are supposed to make us feel sorry for her. But they just make me angry at MDA. Why did it take so many years for them to help her get a ramp to be able to enjoy her backyard like any other child? Why aren’t they helping this family to buy a wheelchair accessible vehicle so they can travel quickly and easily with her power chair? SMA type 3 typically does not affect lifespan, so why aren’t they telling this girl and her family that she CAN live a full life, that she can have friends, go to college, get a job, and someday even find love?

Oh, and the problem with her friends isn’t that she has a disability. It’s that she has lousy friends. Growing up, I was sometimes sad and lonely because I didn’t have as many friends as other kids. But now in some ways I’m thankful, because all the friends I had were real ones. They stuck by me, and didn’t judge me. She needs and one day will find those friends, too. With an accessible van and more opportunities to get out and enjoy typical teen activities like shopping at the mall and going to concerts, perhaps her friends would come around, or better yet she’d make new ones.

As for Jerry Lewis, I believe that at the core his intentions were always good. He took on the MDA cause for the right reasons, and did a lot of good for many years. However, at some point his ego began to get in the way of his ability to change and grow. He became so convinced of the rightness of his approach that he couldn’t even hear the people he was supposed to be helping telling him that there was a problem. His attempts to see the world through their eyes were clouded by his own prejudices and assumptions. Instead of listening and learning, he lashed out in anger. After years of faithful service, he was unceremoniously dumped and pushed aside. In some ways, I feel sorry for him; in the end, his story is the pitiable one. But, he could have changed, or withdrawn from the spotlight with grace. He made his choices, and must live with them as the world moves on. I hope that the positive aspects of his legacy are honored, while also recognizing that many of the ideas he espoused are no longer appropriate in modern times.

None of us get to live forever. What’s important is to do the most we can with whatever time we have. Disability-related charities do not need to invoke images of pity or helplessness to raise funds. It’s OK to show day-to-day struggles, but the emphasis should be on how the organization makes things easier and helps people with the condition get the most out of life. Even – especially – those people whose time is very limited deserve to be empowered and free. Now that’s something to celebrate on Labor Day weekend.