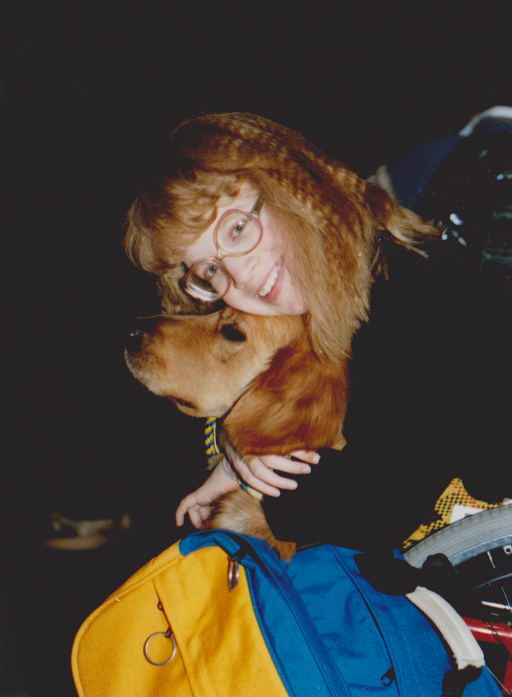 I still remember the three girls. I’ll never forget their names or what they did. The hateful looks, the eye rolling, the whispers and muttering under their breath when I was nearby. The comments got louder when there were no adults around. It started when I was 11, and in the sixth grade at a small private school.  I had already watched helplessly as they ran the fat girl out of school the year before. I shouldn’t have been surprised when I, the girl in the wheelchair, was next.

It’s true, I never fit in at that school. While my family was far from poor, we didn’t live in a mansion like most of the other kids. My parents thought I would be happier in a school with small classes and advanced students. They meant well, but it was a bad situation from the start. I made a few friends, but in those preteen years it’s hard to tell even your best friend how you’re feeling. I was ashamed of being bullied. In the end, I could beg my parents to buy me a designer purse and dress like everyone else, but the bullies saw through my facade. I couldn’t fit in no matter what I did.

I started self injuring, which didn’t help. They just laughed at me even more because my fingers were always bloody. Things got so bad that my favorite English teacher realized what was going on and tried to intervene. She and my parents decided that I should meet with the girls who were bullying me and the teacher would help us work things out. I don’t remember much about that meeting, except that the girls tried to blame me for being bullied. They said it was my fault because I looked weird and did things they thought were strange. The teacher told them that they needed to stop treating me badly, but they never faced any official punishment. Some of the overt harassment stopped, but the whispers and rumors continued. 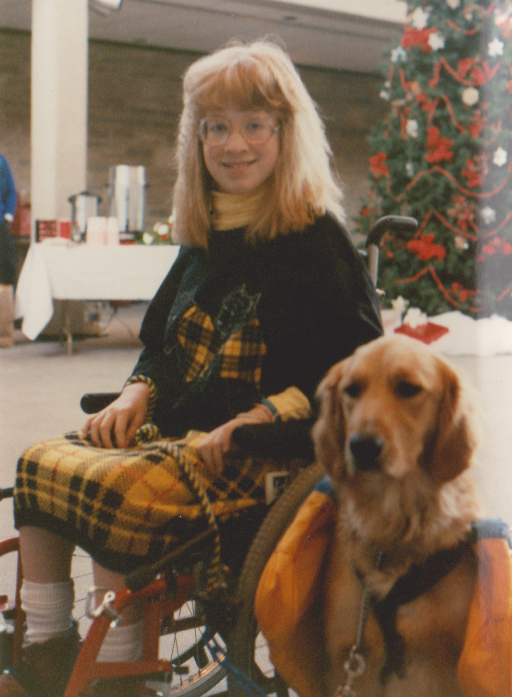 With my service dog Kennedy in 1988

I felt like I wanted to die every day. I spent most of my time reading books and writing stories. I found outlets for my anger. I had this computer game, Sleuth, in which you could enter the names of anyone you wanted, and it would make them characters in the story. It was a murder mystery, so every time one of my bullies was picked as the victim, I would cheer. There’s no excuse for violence, but I’ve never wondered why so many teens have brought guns to school. When you’re in middle or high school and miserable every day, it seems like things will never get better. You learn that adults can’t or won’t protect you. So what option is left?

I could easily have become a statistic. I wouldn’t have hurt anyone else, but I wanted to hurt myself. I probably would have, but there were a few things that gave me hope. I made friends with an older high school girl whom I looked up to (and looking back, I probably had a crush on her.) If she thought I was cool enough to talk to, I couldn’t be a complete loser. But most of all, getting a service dog saved me. Suddenly, I was the cool girl with the dog that everyone wanted to meet. I had a new canine friend who loved me unconditionally, and who helped me live a happier and more independent life. The following year, we moved to another state, where I made friends and had fewer problems with bullies.

You may wonder why I’m writing about this over 25 years later. Shouldn’t I be over it by now? The truth is that these memories stick with a person forever. Bullying leaves scars on the soul that may never fully heal. And it never really stops, not completely. Don’t get me wrong, it gets better. The meme is absolutely true, and if you’re a kid out there reading this, please don’t think that you’ll be so haunted for the rest of your life by bullying that you can’t do amazing things. You can. But the bullies grow up too, and sometimes they don’t change their ways.

It gets better because when we leave school, the world opens up. We get to see that there are all kinds of different people in the world, and no matter how different we feel, there are others like us, and even more who are not quite like us but who will still understand and accept us. We have the ability to make choices about our lives, educations, and jobs, and we can do our best to limit our interactions with toxic people and bullies. But they’re always out there, and if you’re like me, when you grow up and learn to accept yourself, you want to fight back. You want to make them stop, whenever and wherever they may be found.

There’s an Internet forum on which I used to like to post. It seemed like a friendly place at first, and full of intelligent people, but over time I learned that there was another side. These people expect exact agreement with their point of view on everything, and if you dare to disagree, you’ll be attacked and vilified. I made the mistake a few times of holding a different opinion from the group and defending it. The most recent, and last, time was this past week. The attacks were vicious. Rather than disagreeing with my opinions, a group ganged up on me with horrible personal insults. I was called a c*** and told that my mother, whom they knew had died, secretly probably wished she had aborted me. I was accused of being a man, cheating on my taxes, lying about my disability, education and experience, and worse. I complained to the forum administrator, but he did very little about it. It was like middle school all over again – but these are grown adults.

I started losing sleep. I cried every night for a few days, and forgot to do something important for one of my jobs because I was so upset and in a haze. Finally, I had no choice but to walk away from the discussion for my own sanity. I felt and still feel as if I let them win. But I’m most angry that the person who owns the forum condones that kind of behavior. There will always be jerks in the world. What matters is how we respond to them. Failing to act to stop bullying makes us just as bad as the bullies.

25 years later, I still feel guilty that I didn’t do more to support the girl who was bullied due to her weight the year before me. I was nice to her, but I should’ve said something to them. Even though I was just a kid and scared myself, I feel bad about it to this day. Yet others allow people to bully and threaten even when they have all the power and little to lose. Creating a safe discussion place online is a big responsibility; I know, I used to run two. There’s a balance between letting people speak their minds, and preventing offensive behavior. But those postings clearly crossed the line, and not acting upon them just makes the forum yet another place like YouTube or Yahoo where people can post hateful comments with impunity. That’s not why the Internet was created. It can be better, and we all have the responsibility to make it so.

I’m very thankful that I didn’t grow up at a time when the Internet was in everyone’s home, when every tween, teen, or adult could take their anger out on others semi-anonymously online. I had some protection from bullies because I was often surrounded by adults. Today, that’s not the case for most kids. Many parents don’t carefully monitor with their child does online, especially on their cell phones and other personal devices. It’s been shown that many of the teens who have committed suicide in recent years were bullied via text messages and social media postings. I feel certain that the passive aggressive girls in sixth grade would have used those methods to attack me, had they been available.

That said, the Internet has the potential to be a lifeline for young people. I know it was for me a few years later when I got to college. I was able to make friends with common interests, express my creativity, and educate myself on many topics. It was a safe place for me to read about what it meant to be gay, and realize that I am and that it’s OK. I came out to my online friends long before my in person friends.

I’m able to share this today because the Internet gave and still gives me my voice. It has given me far more safe communities than unsafe ones. It gave me knowledge and skills and job opportunities that I wouldn’t have had otherwise. My life has gotten better, and even though I still think about the bullies sometimes, I’m no longer controlled by them. I can speak out here and say NO. It’s not OK to bully someone for who they are. It’s not OK to attack someone with anti-disabled insults for having a different opinion, or behave like a middle school bully at any age. We all need and deserve a voice.

It may be that only a handful of people read what I say here, but that’s OK. If my blog helps even one person, especially a young person, to see hope and possibility in their future, then it will all have been worth it. That’s why I do what I do. That’s why even though situations sometimes get me down, I always fight my way back. It’s why I write. It’s why I exist.