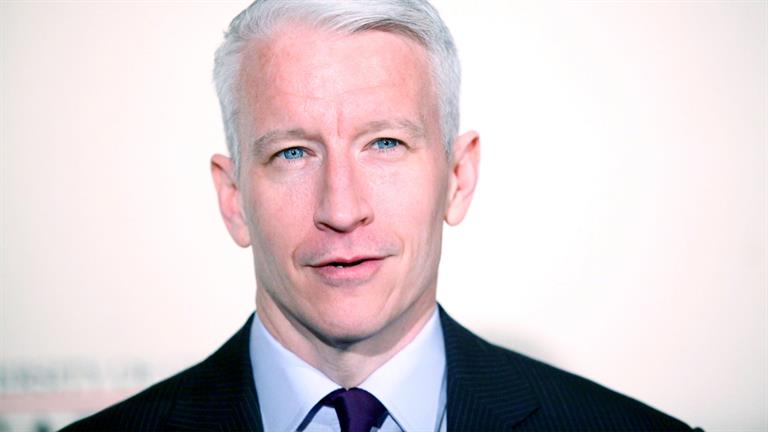 I recently watched your 60 Minutes piece about so-called drive-by ADA lawsuits. As a person with a disability, I too am dismayed by law firms that choose to target businesses for minor Americans With Disabilities Act violations. But by choosing this small number of questionable lawsuits as the focus of your story, you’ve missed the bigger picture of continued, pervasive inaccessibility 26 years after a law that was supposed to ensure equal rights for people with disabilities.

I was born with cerebral palsy, and have lived as a wheelchair user both before and after the Americans With Disabilities Act was passed. I live a full and successful life today thanks to IDEA and the ADA. Before these laws, I might have been placed in an institution, or been trapped at home without any opportunities for education or employment. Instead, I was included with my non-disabled peers in public school, graduated from Stanford University, and have been employed in meaningful jobs for the past 20 years. I have shopped for groceries, attended concerts, and eaten at a wide variety of restaurants. I have visited 36 US states, and as a travel blogger I share my experiences with accessibility in big cities and small towns. I’ve seen how far we have come… and how far we still have to go.

Although the ADA was passed over 26 years ago, many businesses are still not wheelchair accessible. I’m not talking about a parking space without a sign, or a mirror that’s an inch too high. Nor am I talking about a business on the third floor of a 100-year-old building with no elevator. I’m talking about simple yet significant problems that could and should have been solved years ago. 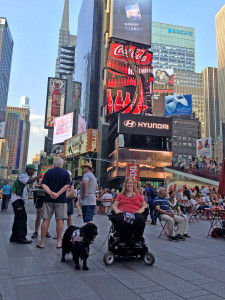 Let me give you an example, one everyone can see. I know you’re a New Yorker. I have visited New York City many times, and something stood out to me that I bet you haven’t even noticed. So let me show you. The next time you go for a walk in New York City, look at the entrance of every business you pass. Ask yourself, “Could I get in that store if I used a wheelchair?” You’ll start to see how many have a step to get in. One single step. I can’t access any of those businesses. I can’t eat their food or buy their antiques or sip their drinks. And neither can anybody else in a wheelchair.

As a wheelchair user, there’s something especially infuriating about places with one step. It’s such a small barrier, so simple to fix, yet in 26 years no one has bothered. No one at that business has cared enough to value us as customers, let alone follow the law. This problem is ubiquitous in NYC. And you probably haven’t noticed it, Anderson, but it hits close to home. Very close to home. When I started to write this piece, I did a bit of research on your life. I noticed your partner, Benjamin Maisani, owns a few bars in New York City. So of course I wondered, are his bars ADA compliant? And it turns out that at least one of them is not. 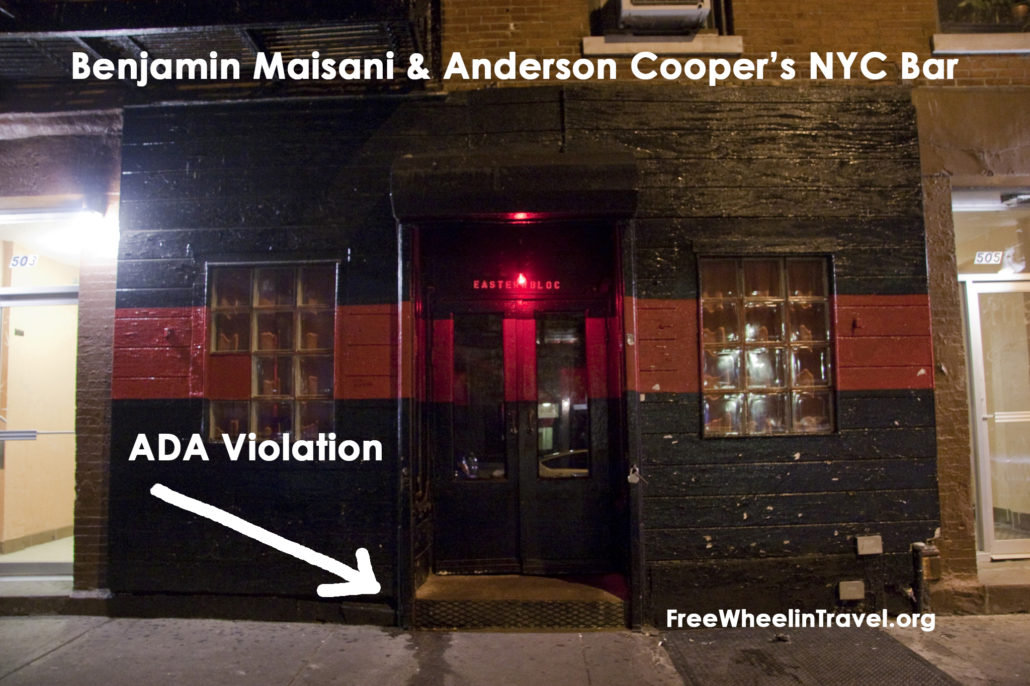 Maisani owns three bars. The Atlas Social Club has an accessible entrance. Bedlam seems to have something of a ramp, though it’s quite rough. But the Eastern Bloc, on the Lower East Side, has, you guessed it, one step at the entrance. Now as a lesbian, male go-go dancers aren’t really my thing. But my gay male friend with cerebral palsy would certainly enjoy an evening there — if he could get inside. I suggest examining the blatant accessibility problems with your own business before running a story that implies most ADA violations are minor.

When businesses complain about the supposed high cost of ADA accessibility, they forget how quickly basic modifications will pay for themselves. Consider a small NYC grocery store with a step at the entrance. Let’s say they spend $2000 to install a ramp — which they can deduct from their taxes. This gains them one customer who uses a wheelchair… just one. Doesn’t sound impressive, right? But he shops every week and spends $100 each time. With just that customer, they’ll cover the cost of their ramp in new profits within the year. And chances are, he won’t be the only new shopper. Parents with strollers, people on crutches with temporary injuries, and elderly folks will also visit the store when before they might have gone somewhere else. Accessibility is a human right, and it helps everyone.

As I mentioned, I travel all over the country. Some cities and states are better than others when it comes to access. But I’ve experienced major violations of the ADA everywhere. I’ve applied for jobs and had companies respond with enthusiasm when they see my education and experience on a resume, then watched an interviewer’s face fall when I rolled into the office with my wheelchair. I’ve gone without a shower for two days because a major hotel chain gave the wheelchair accessible room I reserved to someone else. I’ve missed out on parties and concerts because the venue had a step. I’ve had to visit several businesses in an area just to find one where I could use the bathroom. I’ve nearly tipped my wheelchair over trying to navigate broken curb cuts and potholes in sidewalks.

I didn’t file a lawsuit about any of these incidents, because I didn’t have a lawyer. But if I had, I would have won. These are the kinds of Americans with Disabilities Act violators you should be talking about on your show, the companies that have had 26 years to become accessible but would rather shirk their responsibilities. The vast majority of lawsuits involve significant access barriers. Why aren’t you talking about those?

Mr. Cooper, I’ve seen you show tremendous respect for people with disabilities before. After Adrianne Haslet-Davis was injured in the Boston Marathon bombing, I followed her story closely, and watched you help her on her journey through grief into accepting herself as a person with a disability and recognizing how much she could still accomplish. I admired you for this, and for much of the other work you’ve done. I don’t understand why you would pursue a hit piece against a community that already struggles so much for equal rights. But it’s not too late to fix this. Here’s how.

I’m inviting you, Anderson Cooper, to meet me in New York City for another 60 Minutes story about the ADA. We can wade through the throngs in Times Square, or get some dumplings in Chinatown. We can try to take a subway from Midtown to Battery Park, or look for a wheelchair accessible cab to hail in the East Village. We can visit your favorite spots and see how many of them I can enjoy, too. I promise, you’ll see a different side of this issue, and your perspective will forever be changed.

My motto is “A journey of a thousand miles begins with a single ramp.” Do you have the courage to join me on a journey, to learn what it’s like to be a person with a disability navigating the world? Just let me know the time and place, and I’ll be there.