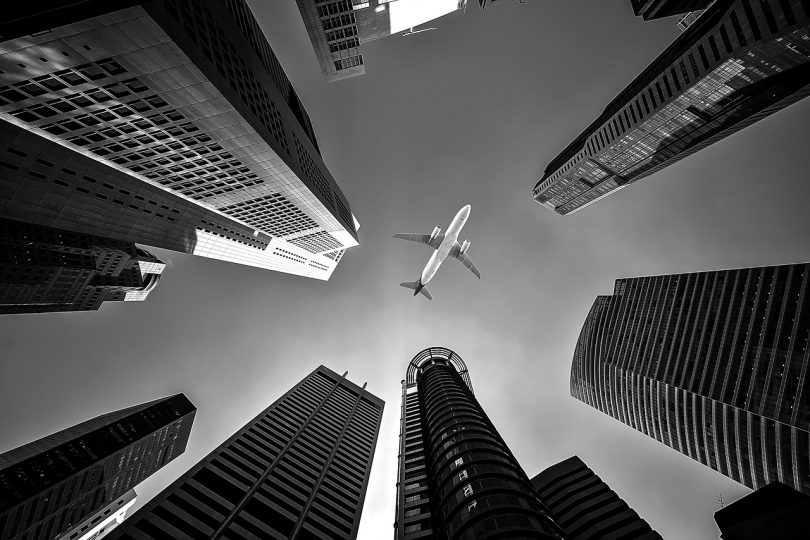 “Ladies and gentlemen, please fasten your seat belts. We’ll be experiencing some turbulence.”

As a traveler, those are words you never want to hear. As a traveler with a disability, what came next changed my perspective on airplanes forever.

Prior to that day in 1997, I had flown many times. I traveled often as a child with my parents, and as a college student at Stanford University, I was flying to and from home regularly. I had experienced turbulence of the usual variety, some light bumping around as the plane flew through clouds or even the edge of a storm. This was different.

The plane bounced around roughly as we made our approach to the airport where my parents were waiting to pick me up for summer break. As we started to land, it got worse. Even though we were well below the clouds, the plane pitched and dropped what felt like hundreds of feet at a time. In the bulkhead row, alone except for my service dog, I felt terror coming over me, and started to cry. I called out to the flight attendants, asking for help, but they remained buckled in their seats. One regarded me with cold annoyance; another seemed concerned, but said nothing.

I could see the runway below us, so close it seemed we could almost touch it. But the plane did not land. Instead, it took off again, jerking its way back up into the sky in a terrifying reversal. A couple of minutes later, one of the pilots came on the intercom. He said it had not been safe to land the plane, and we would be diverting to another city, a two-hour drive from where we were supposed to land.

When we finally got there, the kind flight attendant came to sit with me. She held my hand and offered comfort. I asked her to contact the airport and have them page my parents over the intercom (no cell phones then) to see if they would come to where we had landed to pick me up. I desperately wanted to get off that plane. She did, but not understanding the full scope of what had happened, my parents said no.

But in another act of kindness, the flight attendant found another passenger to sit next to me, the perfect person to distract me with conversation and relieve my stress. He was an opera singer, and also worked at a school for children with disabilities. I’ll forever be grateful to him; I wish I remembered his name. He helped me stay calm until we made it safely home.

Flying was never the same for me after that day. I realized just how helpless I was as a person with a disability on an airplane. I had no one to help me as I struggled to hold my balance in a seat that provided me with no support. If we had made an emergency landing or survived a crash, I would have had no means of escape. Would anyone have helped me? Would they have even remembered I was there? Meanwhile my wheelchair was trapped below in cargo, useless to me, undergoing who knows what kind of damage as the plane hurtled through the sky. Amazingly, it survived unscathed — but I was changed forever.

I flew a few times, white-knuckled and Xanaxed, after the turbulence incident. But after graduating from college in 1999, and the death of my mother a few months later, I stopped. It made more sense for my father to visit me than for me to deal with the stress of flying. I thought I was happier not having to feel the terror of getting on an airplane again. But it had negative consequences, too. I became more distant from other relatives who lived far away. I felt more limited in my life and the possibilities that were open to me.

Now, people sometimes say to me, “…but you could fly, if you really wanted to.” I’m sorry, but that shows they don’t understand what it takes for someone like me to get on an airplane — and they certainly don’t understand how it feels.

First I have to go through a security screening, where post 9/11 travelers with disabilities face extra scrutiny and an almost-guaranteed groping. To get on the plane, they strap me in an aisle chair — a narrow, barely-padded wheeled device that looks like something to restrain Hannibal Lecter. The aisle chair is rolled into the plane and next to the seat. Then someone — usually two poorly trained airline employees — must lift me into my seat. I’m separated from my wheelchair — my legs — with no way of escape in an emergency. I can’t go to the bathroom for many hours, so I have to wear a diaper and have no means of changing it. I have to spend hours in a cramped airplane seat, feet dangling and shoulders hurting as I wedge my elbows against the armrests to hold my body upright. I have to do all this while battling crushing panic attacks due to my traumatic airplane experience.

After I arrive, I may be stuck on the plane far longer than other passengers while awaiting an aisle chair. Then I wait even longer in the terminal for my wheelchair to be brought up, praying it won’t be broken, as it was on three occasions. Finally, I have to find accessible public transportation to my hotel, or rent an accessible van at a higher cost than regular rental cars. Then a week later, I have to do it all again to get home. So could I fly? Yes. But why on earth would I? I refuse to put myself through such a horrible experience and support an industry that disempowers me and others with disabilities in such profound ways.

A few years after moving to the West Coast, I started rediscovering the joy of road trips. I drove up and down the coast of California several times, even once going as far as Portland, Oregon. When I became trapped in an abusive relationship, my traveling life ground to a standstill, but a life-changing road trip from California to New York — taken only because I couldn’t fly — liberated me from the fear and low self-esteem she had used to control me. Would a plane trip have done the same? I can’t know for sure, but I believe the open road has a quality no other form of travel can match.

If you want to see the world, you have to get on a plane — otherwise you spend too much time getting to your destination. At least that’s the common wisdom. Most people never think to challenge it. But my life has been such that I’ve had to find different ways of doing everything — and it gives me a unique perspective. In my travels by car, I’ve realized that people who fly miss out on so much. They miss out on parts of the United States they assume are boring. They’ve even labeled those places “flyover country.” In my experience, they are missing out. I’ve met wonderful people and had amazing experiences in the most unexpected of places. If you think there’s nothing worth seeing in Nebraska, it’s only because you haven’t been there.

Yes, there are areas of lonely road with no cities or towns for miles, but they remind us just how big this world is, and how tiny we are in comparison. When we experience places by following the roads that lead between them, we understand how each community flows into another, and how where we live influences who we are. I’ve visited many places where I would never want to live, places whose cultural values are anathema to mine, but driving there helps me understand their perspective. I believe closed-mindedness comes from not traveling, from not seeing how other people live and therefore assuming our own culture and community is better than any other.

When I decided to start blogging and focus on travel, I wondered if I could be successful. I don’t fit the image of many travel bloggers — young, skinny, perennially cheerful and always jetting off to some new and exotic locale. I don’t stay in luxury hotels, or camp in the rainforest with only a machete. And I don’t fly. How can I be a travel blogger if I don’t fly? But then I realized — my reason for questioning my path was the very reason I should choose it.

There are a lot of people like me — people with disabilities who never or rarely travel by air because planes are inaccessible to us. Sadly many have given up on traveling altogether because it seems too difficult. I want to show them it doesn’t have to be that way. We have alternative paths that can be just as enjoyable, perhaps even more rewarding to follow. We can even blaze a new trail.

So yes, I’m the travel blogger who doesn’t fly. Don’t get me wrong, some days I wish I could just take a plane; it would save time, and I think it’s appalling that in 2017 people with disabilities don’t have equal access to air travel. But I also choose to find value in the road less traveled, to find lessons in the bumpy, winding path of life that takes me in unexpected directions. As for Europe? Australia? They have these useful things called boats. And the moment I can afford to roll onto one, I’ll be there. In the meantime, see you on the road!

To learn more about how inaccessible air travel is for wheelchair users, please read my article Why United Airlines Abusing a Passenger Doesn’t Surprise Me as a Disabled Traveler.