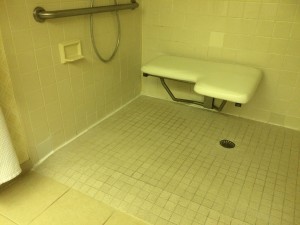 The wonderful ADA compliant roll-in shower in the hotel room we originally reserved.

It’s been a few days and I wanted to post an update on my ordeal with being denied the roll-in shower room that I booked at the Crowne Plaza Hotel in Englewood, NJ. We are now in the room that we were supposed to have all along. It became available on Sunday, so we spent the whole day moving our stuff. I finally got my shower (and after having spent Saturday in the blistering heat at Coney Island, it was a huge relief.)

We were stuck for two days at the lousy Holiday Inn in Fort Lee, and didn’t get the Crowne Plaza room any earlier than they originally said. So really, they did nothing as far as honoring my reservation. They did reduce my nightly rate, and gave us vouchers for free breakfast every day, so that is something. But it doesn’t change the fact that I lost two days worth of my trip. I could’ve been out exploring NYC and visiting my friends, but instead I was dealing with trying to find a room, attempting to get help from the central reservation system, and having to change hotels multiple times. 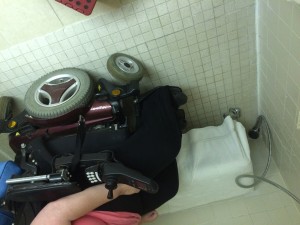 How a roll-in shower works – see how I can park right next to the seat and easily transfer.

They’ve said nothing about what they’ll do to prevent this from happening again. I have no assurances that if I ever book this hotel again, I’ll get the correct room. I haven’t received any apology or contact from IHG corporate about what went wrong. You’d think I would be crazy to ever stay in this hotel again, right? But the reality is that I have limited choices. This is my fourth trip to New York City, and now that I live substantially closer, I hope to visit a couple of times per year. The Crowne Plaza is very near my good friend’s house, so I can easily pick her up and drive into the city, etc. I can’t afford to stay in Manhattan. I can’t stay with friends or in most low end motels, because they aren’t wheelchair accessible. The Crowne Plaza is the only affordable yet decent hotel in the area, that I’ve found thus far anyway. I should have the right, I do have the right to book a room and get what I pay for, at the time of arrival.
The Crowne Plaza staff have been kind to us, and apologetic. But until I know that the problem itself has been fixed for the future, I’m not going to be satisfied, and will continue to demand answers from IHG. You guys have had 25 years to comply with the ADA and figure this stuff out. Yet, I’m still willing to help you. You just need to make an effort and contact me.
253 , 1