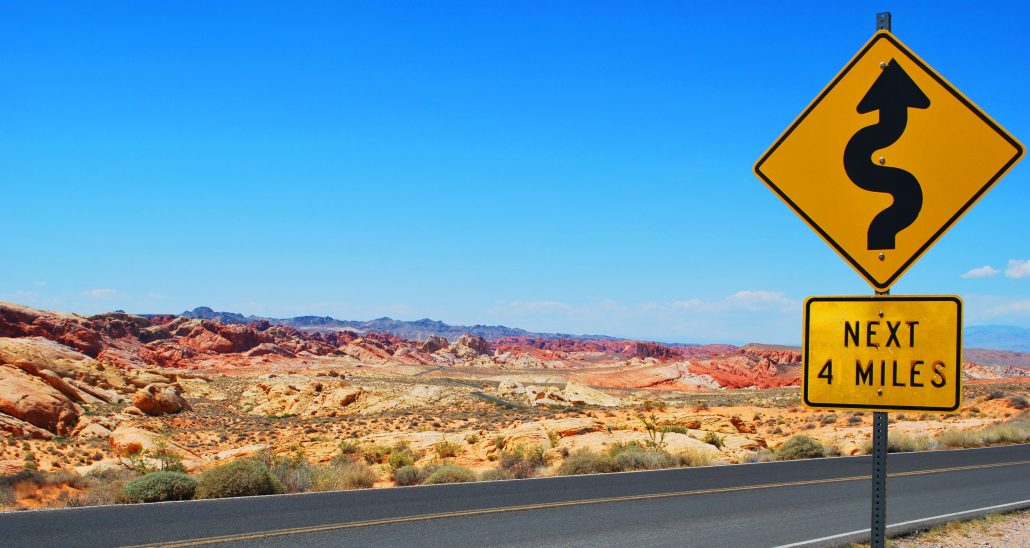 Lonely desert road with a sign showing curves ahead.

My recent road trip to California ended in disaster. One of the caregivers I was traveling with became irrational and abusive, to the point where I had to arrange my own rescue for my safety and especially that of Aria. Sometime in the future, I may write more about it, but this is not that time. This is not that post.

“You’ve had a bad run with caregivers, haven’t you,” a friend said in reply to one of my Facebook posts about the mess. I’m sure she was thinking about the home invasion robbery, and this situation, and wondering why these things always seem to happen to me. But the thing is, they don’t. I am not alone in going through this; in fact, as this recent CNN story shows, other people often endure much worse. Yes, the home invasion was unusually horrific, but every single one of my friends with a disability has multiple stories about bad caregivers who stole from them, mistreated them, or were just plain crazy. It happens to all of us. I just don’t stay quiet about it, because I know I deserve better, and I refuse to settle for less in life just because I have a disability.

As humans, we tend not to say much when things are going well. People are more likely to write bad reviews than good ones. When people are wonderful, we take it, and sometimes them, for granted. So my friends and readers of this blog don’t necessarily hear about the many wonderful people in my life, including the assistants who are great. That changes now.

I have assistants who help me every day, who do their jobs with responsibility and respect, who stay with me for months or years and move on when life takes them in a new direction. Many times, we stay in touch and I am happy to call them friends. I’ve also had assistants who weren’t the greatest employees of all time, who just needed a job for a little while and didn’t give 100%, but who never hurt me. Truly, very few have been awful people. I just ended up with a couple of bad eggs on this trip.

I wouldn’t have gotten out of that terrible situation without the help of many wonderful people. So instead of going on about those who did wrong, I want to lift up those who did right, those who were there when the road took an unexpected turn. I want to honor those who helped me because they are my friend, or my boss, or even near-strangers who just believed in doing the right thing.

I want to thank my dear friend of many years, Paul, who stayed calm and stuck by me even while he was witness to and a recipient of abusive behavior from them as well.

I want to thank Cheryl and Sarah, who barely knew me and yet raced to help me at a moment when I had absolutely no one.

I want to thank my Dad, who stepped into action immediately, dealt with the crazy ones and brought an end to my nightmare, and came to help drive me home. Oh, and he didn’t make me get up way too early in the morning to get on the road. 😉

And I want to thank Chrissy, who sent her daughter down to rescue me, helped me feel safe again, and just generally saved my ass… yet again. I can never thank her enough for everything she has done for me during the five years she was my loyal, supportive assistant, the day she saved us during the home invasion, and the two years we’ve been friends since then.

These are just some of the wonderful people I feel honored to know, whom I truly appreciate. There is far more good than bad in my life, and in the world too, I believe. But if you can, please help me remember this in the next few weeks. I might forget, as the reality of what I missed out on fully hits me — how much their scammy behavior cost me financially, the devastation of knowing how hard I worked to make this trip happen, and then I couldn’t even do so much of what I planned or see many people I care about. I wish I could have a chance at a do-over, to get back on the road now and move forward. But I can’t. I need to heal physically, financially, and emotionally, and it will take time.

I know what I do is worthwhile. Traveling and writing about my experiences — the good and the bad — helps other people with disabilities. Working as an editor at The Mighty is even more worthwhile, because I help people to write and share their experiences — people who don’t necessarily have a blog, who may be just now learning to use their voices for change. I have seen people become better writers and self-advocates as a result of getting articles published on The Mighty. And so even though I didn’t get to do most of what I planned on the trip, I did the most important part. I met the people I work with every day, and I honestly truly like every single one of them. I only wish I had more time to get to know them better in person. But that just gives me more determination to make another trip happen sooner rather than later.

A pair of selfish, immature girls can do a surprising amount of emotional damage, but I’ve faced and overcome far worse than this. I won’t minimize what happened, but I also won’t let it stop me from moving forward and finding good travel companions who are patient, kind, and believe in what I’m doing. I will be back on the road soon… and looking forward to seeing YOU!