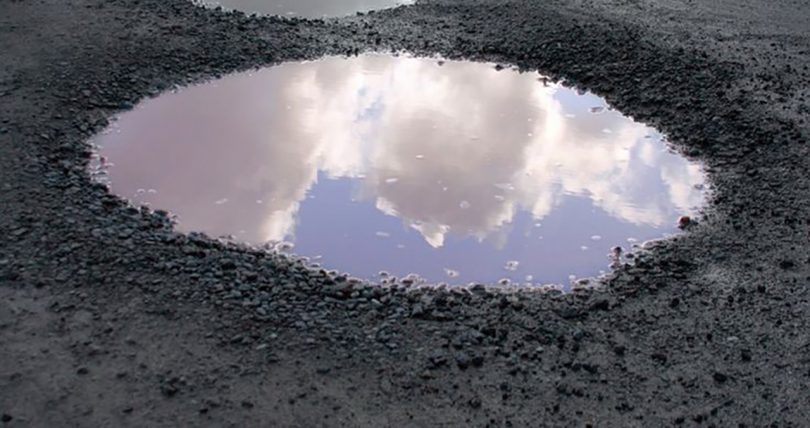 The first time I met an actress friend for whom I’ve done some marketing and PR work, my wheelchair got stuck in a pothole. In the middle of New York City. We were close to Times Square, on our way to a restaurant. She was walking just ahead of me, showing the way, when my yelp of shock stopped her in her tracks. A puddle had concealed a deep pothole at the bottom of a curb cut; my wheels got stuck, throwing me forward. I didn’t tip over, but it was close. She and the others in our group managed to pull my chair free and we continued on our way. I was shaken and embarrassed, but tried not to show it. It wasn’t the first impression I wanted to make, that was for sure.
That was several years ago, but the experience has stuck with me. I was surprised recently when I found out my friend remembered it, too. She said she was startled, and of course she worried that I was hurt or stuck. I was worried that it would change her perception of my life forever. Even though she’s a deeply caring person who wouldn’t hold it against me, I didn’t want her to see me in that situation. But I had no choice in the matter.
I am a strong, capable woman who was stopped in her tracks by a pothole. Sure, it can happen to anyone. We’ve all had an embarrassing moment, like arriving to a business meeting and finding our socks don’t match, or tripping and falling in front of someone we are trying to impress. But for me, it’s not a one-time event. It will happen anytime I encounter a place that isn’t wheelchair accessible — and it’s much more than a physical inconvenience.
A simple curb or a single step has the power to instantly transform how others see me, regardless of who I am or how I feel inside. I become the one needing help, even if my job is supposed to be helping the person accompanying me down that sidewalk. When someone has to help me because of an inaccessible environment, I lose a part of my dignity. I almost always refuse to be carried up stairs for that reason. I appreciate the kindness shown by others when they offer to help, but I don’t want to have to accept the help. I shouldn’t have to need it.
I sometimes feel I am perceived as less professional or capable because I have difficulty accessing places. I know it affects my employability for certain jobs. After graduating from Stanford University, I was the last of my friends to find a job. Companies loved my resume, but I watched more than one Human Resources “professional” react with obvious shock or disappointment when I rolled into the interview. I currently work in the disability field — and I love my job — but I’m also well aware that career-wise, I chose the path of least resistance. Most of my coworkers have some kind of disability or chronic illness, so I don’t have to fight to be taken seriously and I’m treated as a valued part of the company. It actually took time for me to get used to that, to realize my competence was presumed and I didn’t need to constantly prove myself. That doesn’t mean I never have to go the extra mile to succeed — it’s just the opposite. I’m motivated to do and be more because I know I’ll be judged on my merit instead of by my disability.
I haven’t always worked in the disability field. Years ago — after numerous interviews — a fellow Stanford grad working for a music website received my resume and saw what I could do, not my disability. My job there was very similar to what I do now. I’ve been doing freelance marketing and publicity for musicians and actors for years. All things being equal, I probably would have become a manager, publicist, or producer. But all things aren’t equal when you have a disability. So many small theatres and music venues are not wheelchair accessible. It’s hard to put yourself out there as a great candidate for a job when the concert after-party where you could network is up a flight of stairs. I may be great at the job, but there is someone out there with the same skills who doesn’t even have to think about the stairs they just climbed. How could I compete?
How can a person project an image of knowledge or authority if they encounter barriers when simply crossing the street? Would falling into a pothole give you confidence in your boss? Your lawyer? Your agent or manager? Your President? Franklin Delano Roosevelt managed to be President of the United States while using a wheelchair, but that was due to a gentleman’s agreement with the press not to show the extent of his disability. Today’s media in general has no respect for basic human dignity; they would be investigating every doctor’s appointment and posting his medical records for all to see. Our world has become one in which we scrutinize people for the tiniest flaw. But are we scrutinizing the right people? 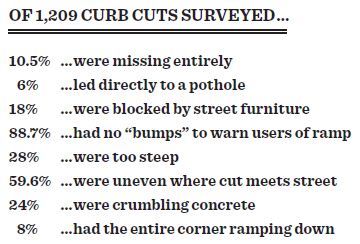 In New York City, there are 850,000 people with disabilities (plus all of us annoying tourists) and 116,000 street corners. Based on this 2015 survey, only 11% of street corners were fully ADA compliant. Even if you take out the detectable warnings (textured for blind individuals) requirement, only 43% were compliant — meaning over half present serious hazards to wheelchair users. My own experiences in New York City bear this out. It’s frankly unconscionable that such a large percentage of street corners have not been changed at all since the Americans With Disabilities Act was passed in 1990. That needs to change, and quickly.
When people see me stuck in a pothole or sitting outside a store with a step, they view me as the one who is lacking. What about the person whose job is to fix that pothole, or the store owner whose business still lacks basic accessibility 27 years after the ADA required it? What about the city that needs to allocate more staff and resources to accessibility? They are the ones who are unprofessional. They are the ones who are incapable of simply pouring some concrete.
Anyone without an affection for extreme sports would be intimidated by what I have to do to get around places that are less than accessible. Barriers that look small to you can be quite significant to me. I don’t say this because I want any kind of pity; quite the opposite. I only seek understanding, and for people to judge me by the standards of what I’m actually doing. Perhaps this is part of why I became a travel blogger. On the one hand, I’m doing something society expects of me — being an “inspiring” disabled person with my epic journeys and (sometimes) deep philosophical insights. But I’m also confronting some of the worst examples of inaccessibility and discrimination on my quest to make travel better for others like me. Travel is fun, but I see this blog as a job, too — and it’s never easy.
I don’t want people to expect less of me in other areas of my life simply because I have to do more to accomplish the basics. Even when people still respect my professionalism after seeing what I go through — as my friend did — it still violates my dignity to encounter inaccessible spaces. It’s frustrating and depressing to know that I could stay home all day, or never travel away from the relatively accessible town in which I live, and my life would be a lot easier. But that would mean I couldn’t do things I love to do, and pursue goals that matter to me. So never assume I don’t want to do something just because it seems hard from your perspective. If I want to do it, I will find a way, no matter whether it’s easy or difficult for me compared to others.
And if I tip my wheelchair while rolling down the street? It doesn’t stop me from being a professional, capable human being. Save your judgment for the person whose job it should be to fix the damn pothole.
343 , 1